GOOD TO THE LAST DOT


ECONOMIC CLIMATE CHANGE CAUSES ICE CREAM MELTDOWN
Temecula, CA – They say, everything comes to an end. For the end of marijuana prohibition that is a good thing, for the only Dippin’ Dots Ice Cream parlor located next to Shakey’s in the Palm Plaza, it’s not so good. At press time, it would appear that the local dessert eatery is kaput. 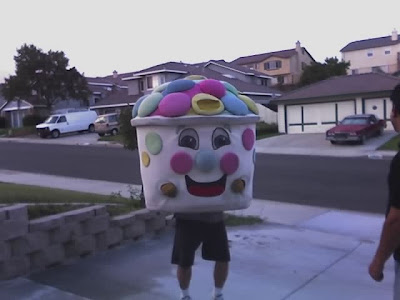 Opened in 2005, June, the ice cream of the future saw a debut month that shattered existing opening month records much the way Best Buy did in the days of the pennant flags. Over the years the business helped to put three girls through local colleges and keep a roof over the head of the Afghanistan family who owned it.
Now in its 25th year, the idea of frozen dots of ice cream, sherbets,  and ices has been knocked off, but for over 8 years locally, valley residents were treated to the original until today. There does remain the remote possibility of corporate takeover. After the jump we take a look back at when the First Dot rolled into town.
(All photos - PT Rothschild)
Posted by Bill Gould at 4:52:00 PM


FROM THE DESK OF THE “FUGITIVE” COMMISSIONER
Hello Football Fans,
I'm back from China, and noticed that the college Top 10 has gotten a shake-up.  It's not a big

reach to predict that there will be more unbeaten teams take a hit in the next four weeks.  Stay tuned.