2ND TIME IN 20 YEARS
Temecula, CA – Imagine awakening to the 2nd snowfall experience in Temecula after living here for 20 years 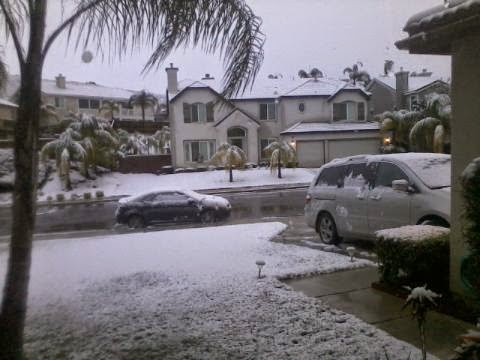 when you come from the winter wonderland of Iowa. Only once before many winters ago did this rare phenomenon happen and as I write this, the sound of surprised and excited kids will soon be heard as the valley awakes.
The surprising snowfall occurred after a rainy evening and scattered cold rain periods during the day yesterday. At present, the temperature is 31 degrees and this time the west hills are covered completely, not just above a certain height. Meanwhile on this side of the valley cars are covered. For a moment I thought I was back in Louisville because it usually snows a wet heavy snow there.
Seeing palm trees drooped with snow on their leaves, grass covered, my neighbor’s coy pond cover wrecked due to the weight of the snow, and the white west hills makes it look like Santa and Jack Frost rolled into town for the Nerds In The New Year function of Cosplay happening tonight at the Uptown Tavern. After the jump are another couple of snowy pics, courtesy of Jack Frost, Old Man Winter, and Santa Claus. One also wonders if this is a sign of the weather-fixing witch due to hit the valley next year sometime.
And now more snowy memories for the photo album. 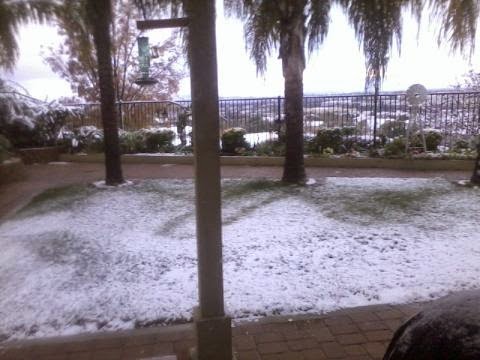 No morning hummers today as the all the birds are huddled to keep warm, maybe roasting frozen worms. 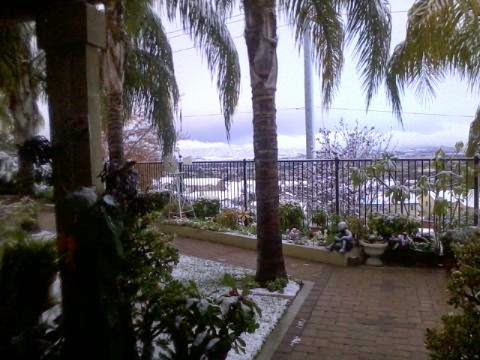 Here you can see the west hills completely covered down to the base, unlike before when it snowed here. 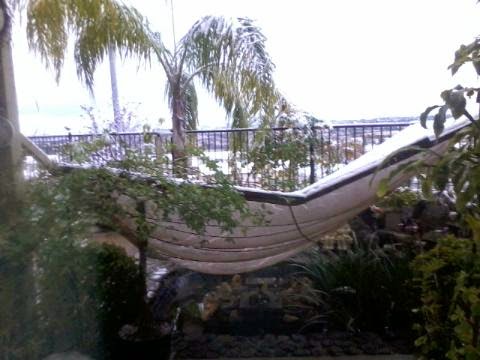 
FROM THE DESK OF THE “FUGITIVE” COMMISSIONER, HAPPY NEW YEAR!
Hello Football Fans,
The NFL playoffs will start this weekend. 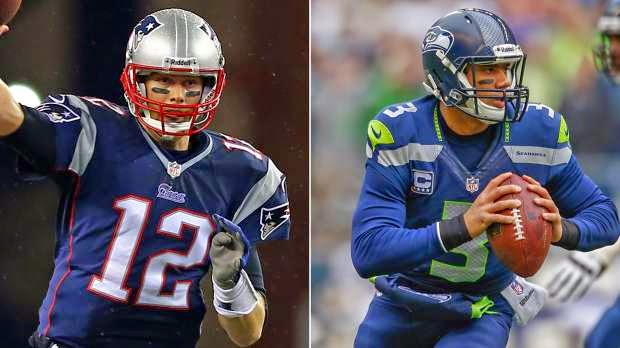 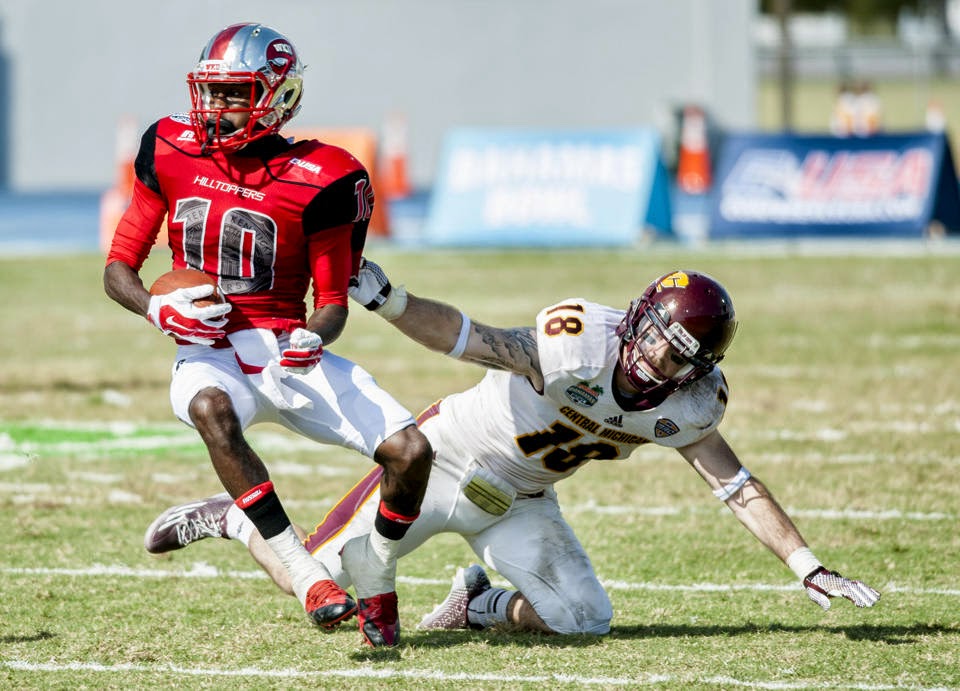 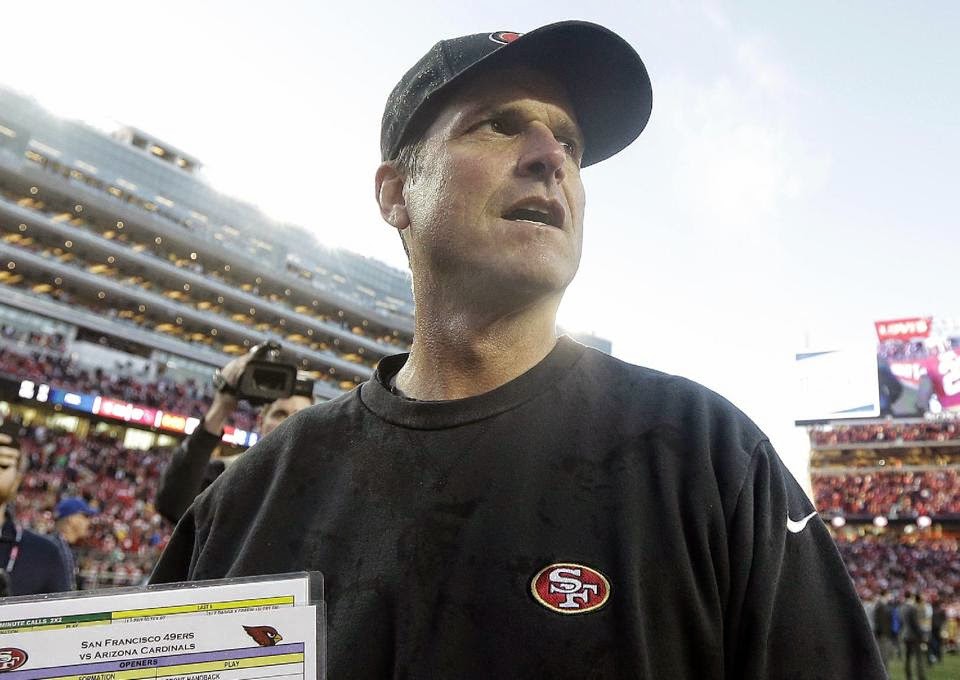 NERDS IN THE NEW YEAR


AND OTHER THINGS CRACKIN’, SNAPPIN’, AND POPPING
Temecula, CA – Wondering where to party this New Year's Eve? Looking for a safe place to have fun and 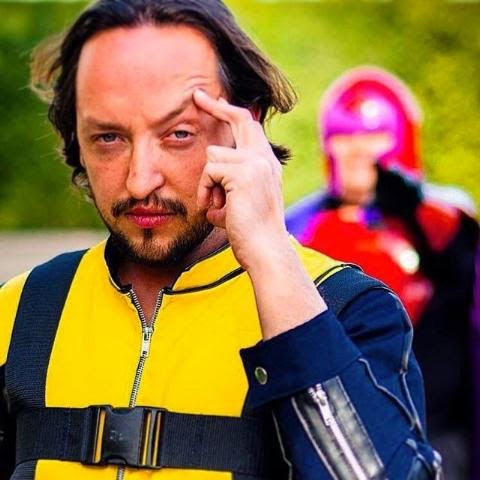 stay local to T-town? Wanting not to be pampered Pechanga style because you’re more of a low roller, a nerd? Look to Temecula’s own Prof. X, aka Ivan, the Club Cosplay King to have a New Year’s gig fit for ones-ies. And local too, as Club Cosplay events next year are planned for in San Diego and Los Angeles early in 2015.
Roll north of Old Town Temec to the old ‘Q’ Club, now the UPTOWN TAVERN for a New Year’s Eve NERD THEME PARTY. Get here Early AND Get in Free...Costume recommended but neverrequired!! No cover before 10 PM.
48 taps, and the entire gourmet pub menu is all priced under $9 bucks! And served until 10 PM; cocktails, 21 & over with valid ID. Uptown Tavern has 6000 sq.ft. of elbow room and EVERYONE IN THE WORLD IS WELCOME. That includes Bruce Banner.
LET’S get Nerdy this NYE – Ivan David McCosplay ** UptownTavernTemecula.com  **
HAPPY 2015!! 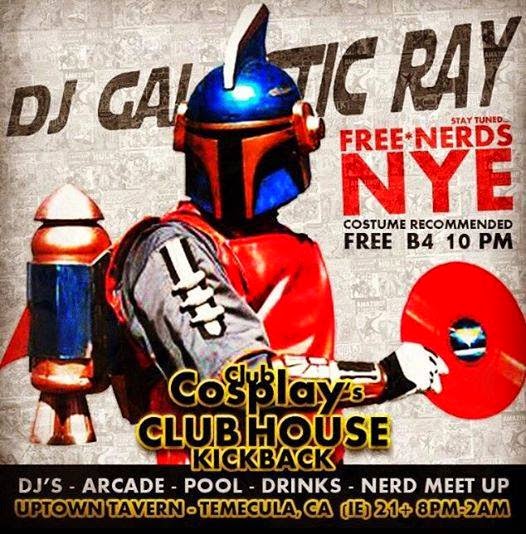 Another club scene happening not far from T-town’s new Velocity, see story, is the R&B Old School Hip-Hop Lounge, happening every Friday and Saturday night after hours at Chins Gourmet, 27464 Jefferson Ave, 9PM-2AM, featuring comedian Mr. Valentine and the LOL Crew. Though a normal weekend set [Holy Madins Flashback, Batman], the new Temec funky spot is also hosting a NYE party for those who aren’t nerds or friends of nerds. 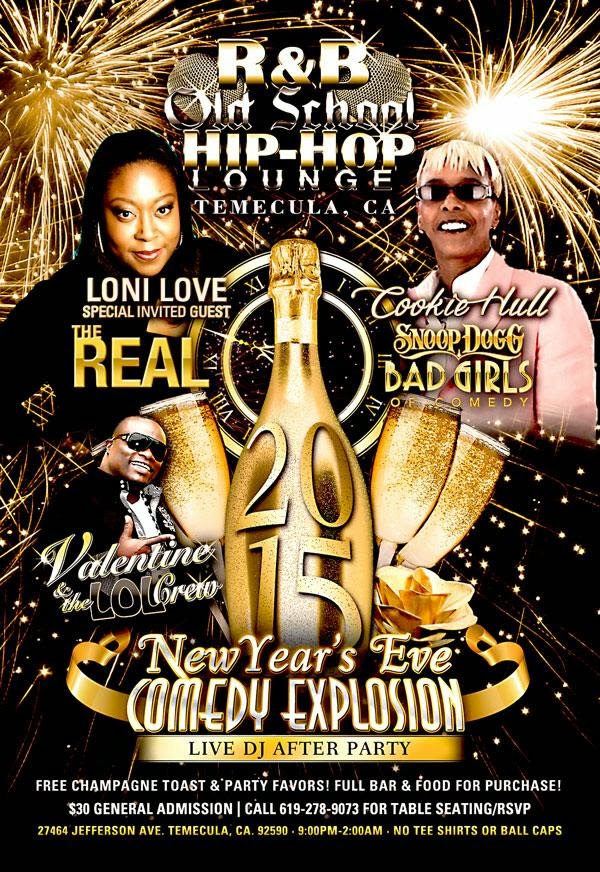 And lastly, speaking of Old School, the valley’s old school ‘old schooler’ Mr. Pete [moi] has dropped his memoirs as an audio book. 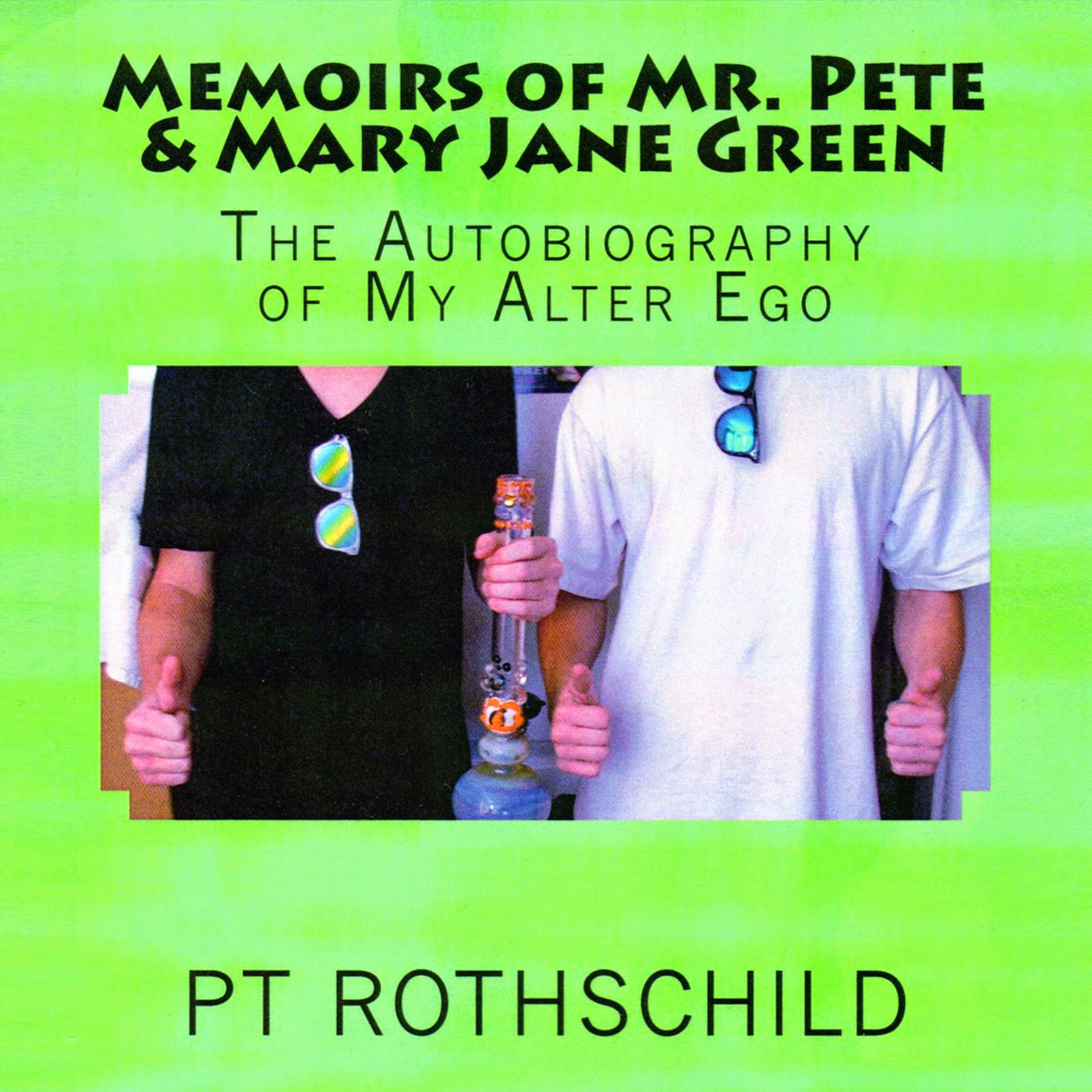