Get it now on Amazon!

Murrieta, Ca - On Monday, April 13, 2015, at 5:49 PM, Southwest Detention Center deputies were alerted to an inmate experiencing a medical emergency in a cell. Deputies immediately began rendering emergency first aid and summoned on-site medical professionals, as well as emergency medical services. Despite the life-saving efforts, the inmate was pronounced deceased. The inmate was alone in his cell and there was no indication of foul play.
Investigators from the Riverside County Sheriff’s Department responded to the Southwest Detention Center and assumed the investigation. The investigation is ongoing and the cause of death is pending the results of an autopsy.  On April 15 2015 the Riverside County Coroner identified the deceased as James Clinton, 51 years old, of Menifee California.
Posted by Bill Gould at 7:30:00 PM

Cat Cora at the Food + Wine Festival in Palm Desert

Palm Desert, Ca - Cat Cora grew up in Mississippi in a Greek Orthodox family full of great cooks. She went to New York's Culinary Institute of America to get her formal training and then continued her education by apprenticing under three-starred chefs, Georges Blanc and Roger Verge, in France. Once back in the states, Chef Cora made a name for herself becoming sous chef at the Old Chatham Sheepherding Company in the New York Hudson Valley and then as chef de cuisine at Bistro Don Giovanni in Napa Valley. Her rising success did not go unnoticed by the then up and coming Food Network where she co-hosted and hosted several shows on the network before making history and becoming the first ever female Iron Chef.
It was my first time at Food + Wine Festival Palm Desert, something I had in common with Iron Chef and James Beard award winner Cat Cora. The difference was that I was there to eat, watch and mingle, and Chef Cora was there to present her culinary skills. With her own restaurants across the country, countless awards and the title of Iron Chef; there was no way I was missing this famous female's demonstration.

Inspired by the region, climate and her strong Mediterranean heritage, Cat Cora presented the gathered masses with a Salmon and Scallop skewer with Romesco Sauce. This recipe fit her cooking criteria by being light, simple and easy to prepare. Because we were inside a tent, Chef Cora seared her seafood in a pan. When available, she likes to cook them on the grill along with halves of her favorite citrus fruits. This trick not only makes the citrus flavor more intense, but loosens the fruit so it gives more juice.
For her demonstration meal the Iron Chef uses one of her “go to” sauces, Romesco. Romesco is a beautifully simple sauce made from roasted red peppers and tomatoes, almonds, garlic, lime juice and sherry vinegar all thrown into a blender and emulsified with olive oil. To finish off this summery plate, Chef Cora placed the salmon and scallops on a pile of undressed micro greens and doused it with the creamy romesco.
When Iron Chef Cat Cora cooks at home, she is just Mom. The mother of four boys, all under teen age, her light and easy style of cooking plays a huge role. She loves cooking healthy, flavorful lamb and seafood dishes, but also loves her Southern roots; saying fried green tomatoes are one of her down home favorites. 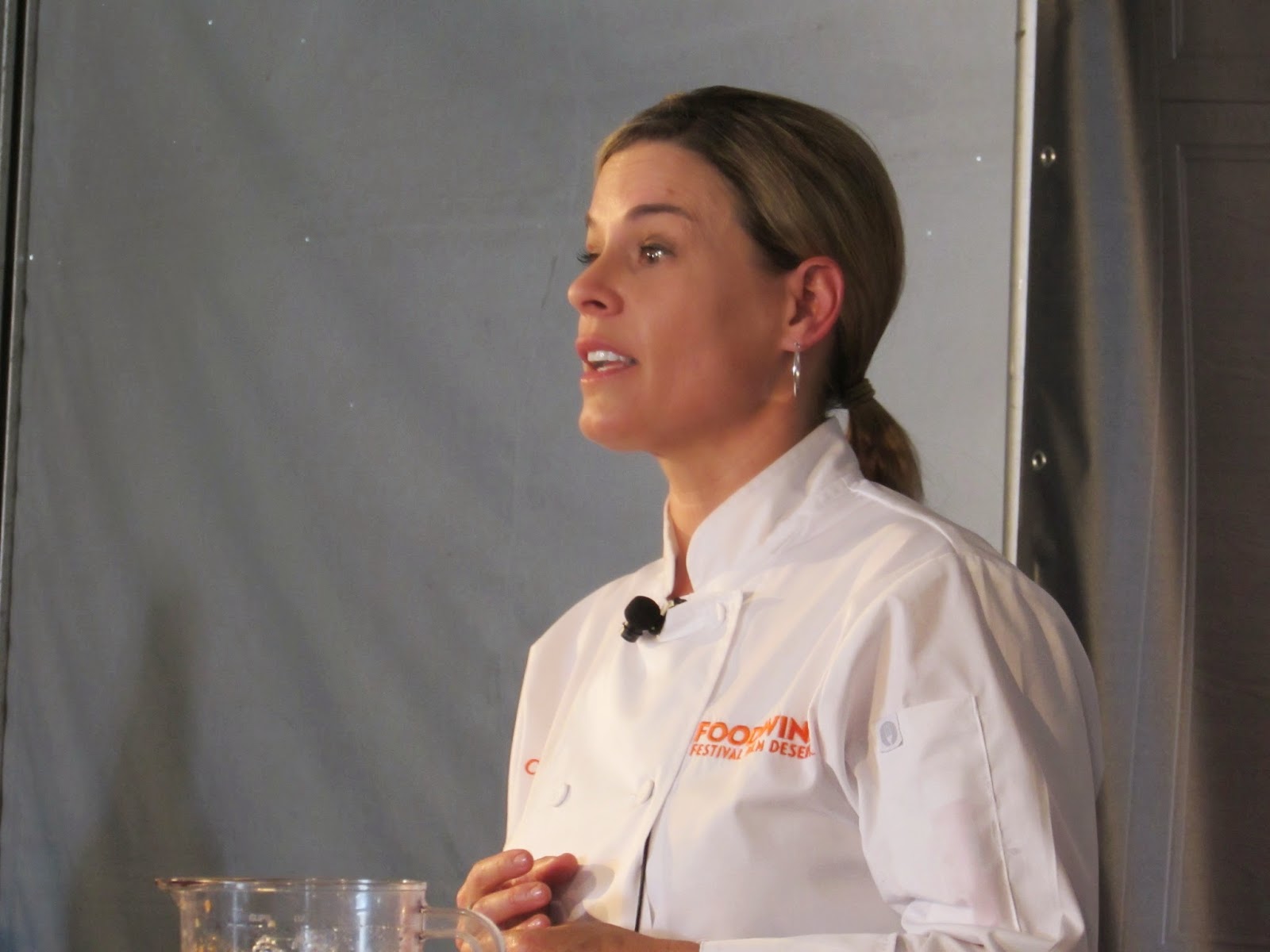 I was able to ask Chef Cora my own question for the Temecula Calendar readers: “If you were not a chef, what would you do?” Cat Cora said she would be an actress. She has already done some on screen cameos and says she would not rule out acting later in her career. (Exclusive: You can see our Q & A in the accompanying video!) A natural entertainer, she incorporates her love of the stage in her cooking and demonstration. Lively and energetic, her southern charm and positive attitude had smiles on everyone's faces, though none bigger than her own.
As for now, she is currently set to compete on the upcoming fourth season of Chopped All Stars on Food Network where she has a chance to win $75,000 for her favorite charity. Chopped All Stars premieres Tuesday, April 28 at 10pm.
Posted by Bill Gould at 8:00:00 AM