MARVEL'S QUIRKIEST TITLE -
BSC, CA – Back in the day, Marvel Comics, who started showing story credits in the industry and giving headaches to superheroes, had two great artists to hang their hats on. One was Jack Kirby, whose bigger than life illustrations were 3D before 3D. His panel-busting drew you into the action with comic drawings that stood out and made your blood pump. His figures, from The Avengers to The Fantastic Four, practically leaped off the page and into action right before your eyes. You went to the next panel because you had to.
The second Marvel artist that was great [imho] was Steve Ditko, whose style was kind of the opposite of Jack's. Steve Ditko was the master of the small panel and its emotion. Both artists used their visuals not to just tell a story but to show the perspective of it. Jack was the big picture, Steve Ditko was the small screen. It was this precise perspective that led to the success of Spiderman as the downtrodden, misunderstood superhero persona. Ditko's art visuals did as much to create this image, perhaps more, as did the story plot script written by Stan 'The Man' Lee. Using different exclamation lines around the hero's head almost cartoon-like totally illustrated Peter Parker's angst in a way no other artist could have. 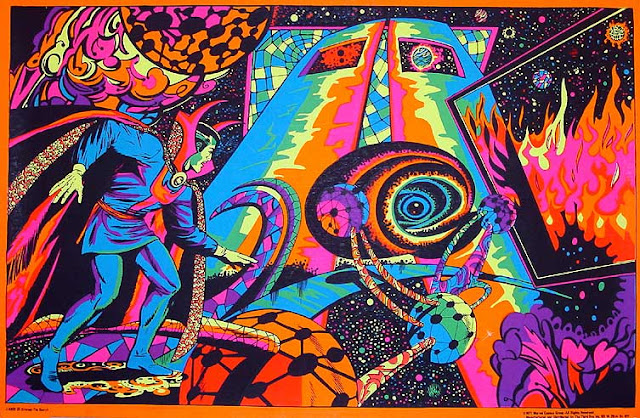 However, if the grandest sights were Jack Kirby's cigar chomping Nick Fury, shield-slinging Captain America, or the soap-opera Fantastic Four battling Galactus, then Steve Ditko had The Amazing Spiderman and Dr. Strange, with the latter title being his tour-de-force artistically. Ditko's art style fit like a glove and soon the unique title where action rarely took place in the outside world, was a cult hit, me included and this was way before Chapter 7 [Memoirs of Mr. Pete & Mary Jane Green]. Dr. Strange is the second of my planned movies to see this holiday season.
Since this is a no-spoiler review, I'll just say that I liked it, my friend, AJ, liked it and the guy who owns the place where I occasionally eat a pizza, liked it. I put these opinions in because this movie deals with magical, aka new age, aka esoteric ideas and themes. Since these themes are multi-layered and abstract in thought, 3 likes is a good indication for me about the place where I live. Perhaps people upstate somewhere might have a different opinion.

Almost as with Guardians, this movie is off the beaten path from super heroes and even Thunder gods, so when that grounding element is thrown back in, it jars you a bit because you are lost in a movie that feels nothing like a comic book based story idea. Even Guardians had Flash Gordon, Buck Rodgers, Star Trek, and Star Wars to hang a hat on. Dr. Strange is completely different. It didn't deal with outer space, it deals with inner space. The comic book graphics done by Ditko have certainly been captured effect-wise because you get lost in the Inception-on-steroids screen action. The energy field areas of glowing color flows have been updated to digital sacred geometric lines of energy shields.
Equally absorbing is the adult dialogue of esoteric values which are explored for their cause and effect. The subtleties of the magic realm are hinted at, like certain 'laws' not to violate or what things to take seriously, are sourced out as well.
Shown also are the origins of Dr. Strange, several of his trademark relics, and his reoccurring nemesis, Baron Mordo. Dr. Strange is a movie to see twice because while it has plenty of action and there is never a dull spot, it is as stand-alone and stand out as GofG was, but on a more cerebral plain that speaks more of what we have seen glimpses of all our lives on this planet. That world that is just around the corner of your mind. And it does exist. It's just that Hollywood gives a grand gesture to it that entertains as it gives you the answer to life. Surrender your ego and open your mind. Trust me when I say that is a lot easier said than done. It makes for great theater though and this movie stays true to the character that I remember.
One spoiler – Yes, there is a Stan Lee cameo but look quick for it. Probably the local PTA complained about his last cameo [or two] with the young girl, lol. Just kidding, Stan.

FEVER PITCH 2
BSC, CA – I'm a romantic, like my mother. No doubt everyone outside of Ohio, Hillary Clinton, Huma Abedin, and Tony Weiner are ecstatic this morning over the Chicago Cubs winning the World Series for the first time in 108 years, wooo! Just the other day to get in the mood, I sat with a box of Kleenex and watched both Drew Barrymore classics, Never Been Kissed and Fever Pitch. 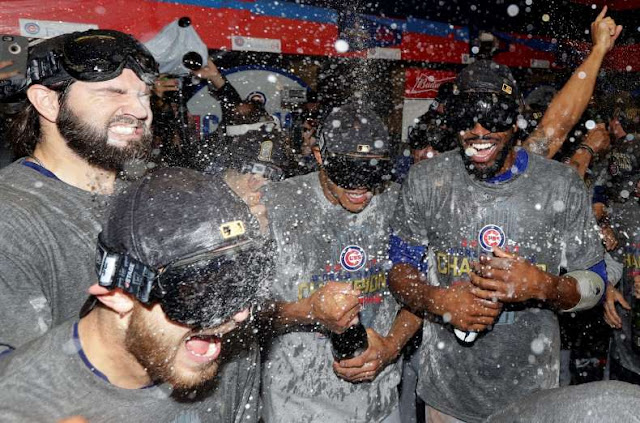 I caught part of the game, almost fearing if I watched the whole game that I might jinx the old goat herders. In my heart I was hoping the Cubs would end the curse, and they did. I guess the old goat finally did forgive them their transgression, or maybe curses have a time limit. From the story I'm about to post about the Clintons, I can guarantee that their luck is about to change also, but not for the better like the Chicago Cubs.
Maybe this weekend the USA murder capital will be someplace other than Chicago. We can only hope. Meanwhile we will all revel in this moment of vindication for the team that had the longest World Series drought in either league. Somewhere on a mound way over yonder, all the great Cubs in Paradise are gathered, hugging, and crying with joy. After the jump we look at a few more pics from the night.
Bill Murray, always where the action is going on these days, was, of course, on hand in Chi-town. 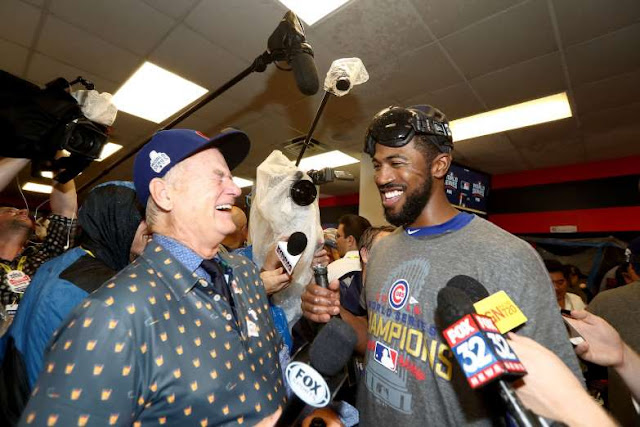 Of course, Bill Murray was just the most famous happy person at the game. There were the crowds, 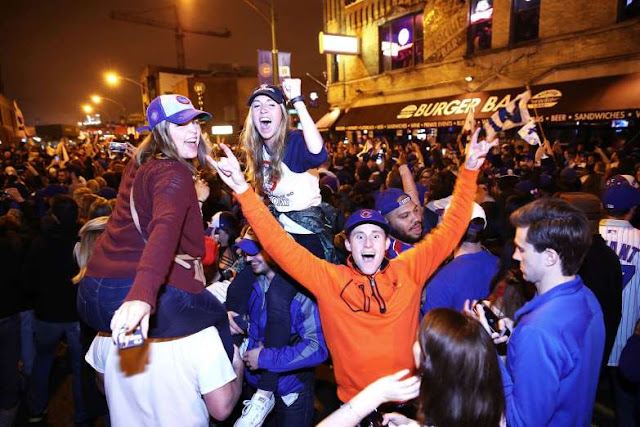 And the team, starting with the MVP, 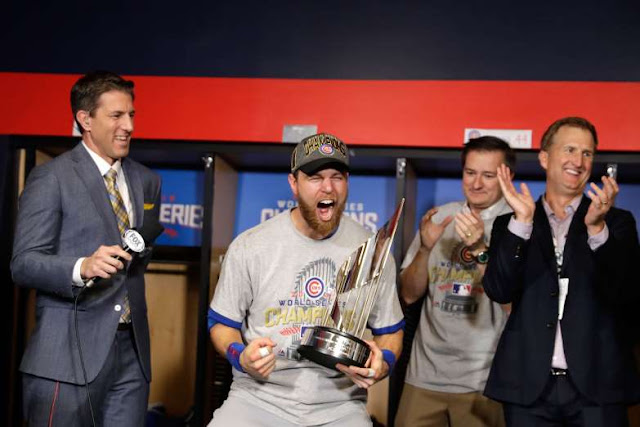 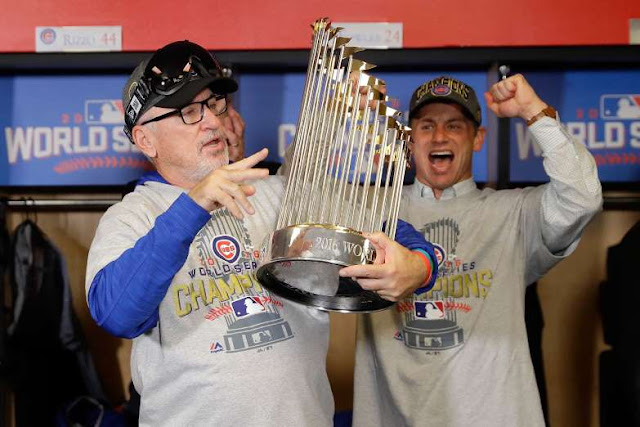 And their teammates, one the oldest man ever to homer in a World Series. 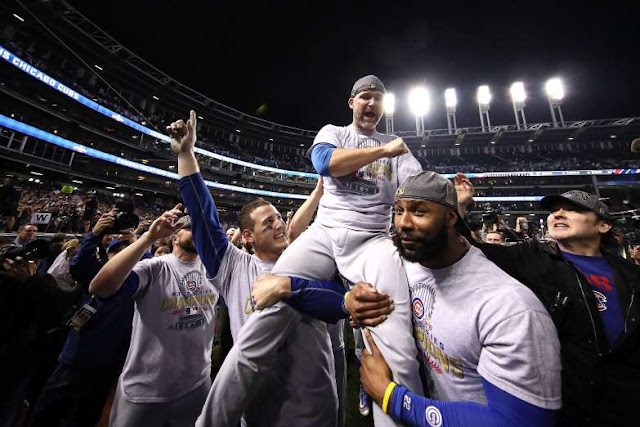 Those of us in the wiz biz can only hope that maybe this will heal the bitterness in a beautiful city. 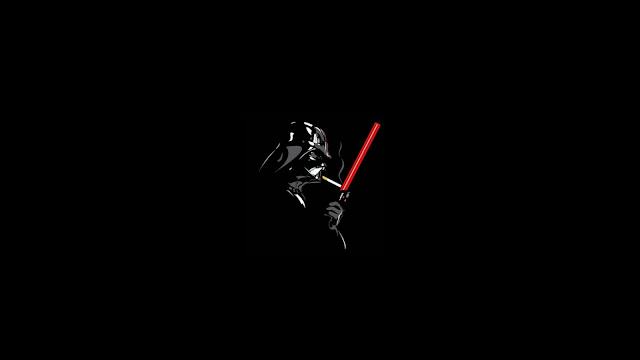 Tortillas - one of the most wonderful foods ever 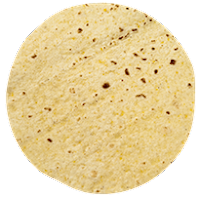 Like many packaged products in our kitchen, as a family of three, we end up with a few too many tortillas when we buy them for taco Tuesday.

If you are looking for a way to use ALL of the tortillas that come in your Mission Brand Tortillas (as pictured), check out this very informative article: http://www.saveur.com/corn-tortilla-recipes?dom=currents&src=syn

Do you have any great recipes that use tortillas? Please share.
Posted by Bill Gould at 1:00:00 PM