FROM OUR SIDE TO R-SIDE -
BSC, CA – When I first started in the new music [unsigned bands, all-ages/no alcohol] scene, I made the decision to be a reviewer, not a critic. It is the same with this series on obesity in Riverside, a problem that is now exploding beyond Riverside, and California, in America. You are less likely to see this phenomena if you drive a car and use social media when out and about. You may also be a person unaware of this, like with chem-trails. Unless there is a sequel call, this will be our last report in this series about Riverside food.
It must be stated in qualifying the intent of this piece that people come in all shapes and sizes, naturally, so this report is for those who eat the commercial, mainline brands from the commercial mainline corporations, as well as those currently or ever enrolled in the National School Lunch Program started in 1946. It became corrupted in 1946 but this report will leave the politics aside as much as possible examining only cause and effects, plus the whys. 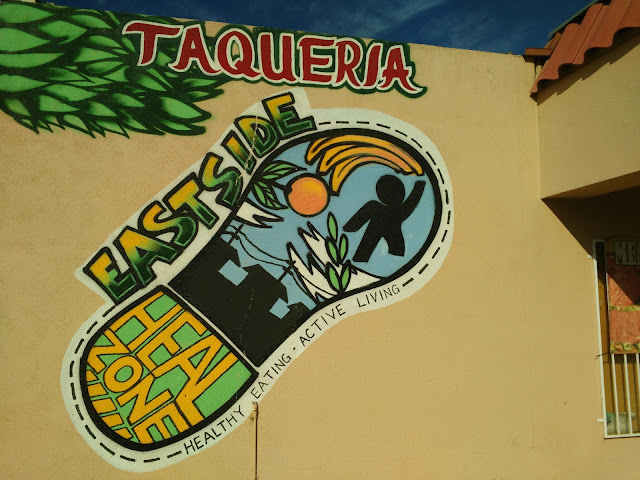 People made obese by food additives, traits that can be passed downed through generations, are as much victims as those called sluts. However, today's women are coming to know what has and is shaping their world. They will be victims no longer. Round people are next! And now, the final segment from a story which started May Day concerning a left wing hijacking. Turns out, I got hijacked too by what I saw. Now our conclusion. Jump.
Again it must be stressed that roundpeople are those made fat through ingestion of mainstream products whose very ingredients cause weigh gain like heifers being fattened for market. In America today you can't help but ingest some GMOs along the line but the trick is to limit the percentage because if you burn as many calories as you take in, your weight will move to its proper size. You won't have those flabby arms, turnip middles, muffin tops, or the extra rolls around the middle. Added face fat will also disappear, as seen in my personal Before[2009 with Afroman], 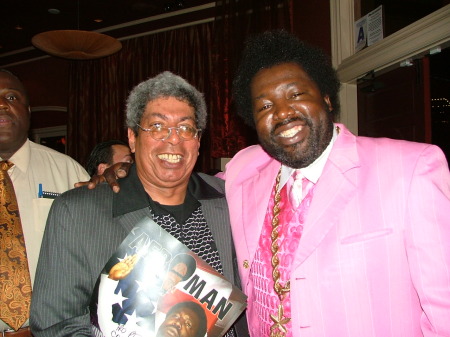 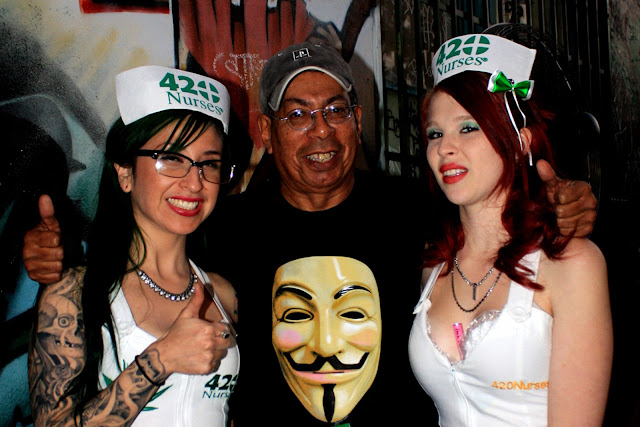 And After, pictured with 420nurse models the day of the biz card photo shoot [early 2013, LA]. The only difference in lifestyle was reading and being aware of specific food ingredients [GMO'd products] plus elimination of refined sugar use [mainly for tea]. At the time of the 2013 picture I'm not sure if I'd noticed the weight loss but the weight loss time frame matched the six month window noted in this article. When I signed up for the nutrition classes given at the Founders Center building at the Parkview Hospital complex, it was curiosity over what food education would be taught since all the hospitals I have seen in Riverside County offer HFCS cola and uncola drinks. 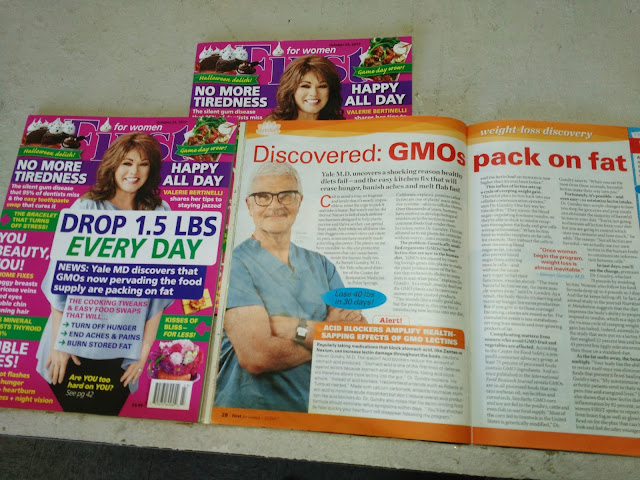 But I did have a purpose beyond curiosity. My hope was to inject some of the knowledge which I picked up along the way politicking for Prop 37 and against glyphosate into the Riverside program that was granted justfor lower income households on the East Side. All the people of Riverside deserve a free education concerning the city's obesity rate cause that is galloping unchecked and what to do about becoming aware of it.
In this cause I was successful in leaving Moms' flyers about organic food and glyphosate, with another flyer expanding the dark role GMO foods bring to the Family's table. At these classes I wasn't there to drop a bale of truth, just some straw. I'm happy to say these tidbits were snatched up like caramel apples at a Halloween party.
Though the set of classes was instructive in reading and understanding a food label, the importance of a balanced meal, hidden/added sugar/salt, and other Home Ec fundamentals, the open-ended forum rather than a lecture, provided a window of awareness to a small portion in a city that is itself a food dessert. The interest and enthusiasm shown on everyone's part [including me] showed there to be fertile ground despite Riverside being a corporate town, as in lock, stock, and burps.
I discovered this feature of R-Side since tooling around to the different ends of the 30 mile long California city of 300,000+, clinching this supposition when I walked into the HUB on UCR's campus researching for another story. I thought I was at Downtown Disney, there were so many Corporate brands with no imagination in selection. Maybe the kids were the ones who had voted for the brands used, but most disheartening was the choice of Subway as a brand for student sandwiches.
Aside from feeding their customers yoga mat buns for decades and finally getting caught by the Food Babe, Subway kept its Corporate spokesperson, a former obesecollege student who lost weight by eating Subway, on its payroll for 7 years AFTER finding out that the same was also a child sex trafficker. Convicted, this person sits in jail currently, as Riverside [and the nation] seems to hold no disregard for this style of corporate behavior. If you don't stand for something, you will fall for anything. Riverside is fat and happy. So sad when you see girls who should be walking in groups, frolicking between classes, now walking solitary looking determined and focused because nothing tried ever makes the weight go away. It must be theirfault, and the Corps go right along with the program. You make money when you treat the problem, not when you cure it.
However, the detour from my main focus with 2018 looming wasn't a protest but a quest. The main two quest-ions to be answered were why R-Side was so round, and was everyone there unaware of what time it really was [in terms of eschatology]. You have read the answer to the first question. Here is the answer to the second.
About 10 days ago I found myself at the bus stop. People in Riverside are friendly so I found myself in light conversation with a stranger that was tinged with a little religious backdrop. Presently a young man walked up, all prim and pressed for work. He was clutching a 32oz fountain Coke cup and he weighed about 380. In fact, he was so pleasant looking in his pressed work uniform that he could have been the stand-in for Santa Claus's youngest adult son in a Coke ad. His cheeks were rosy.
We talked, barely touching on one point before darting off to another and I began to see a pattern in our discourse. It is the pattern of vocal put and call that grants you access into magic circles, but this was all Christian. When the notion that his affliction [the added GMO weight to his frame but never discussed] came about because we are in the Days of Job [discussed here in a previous story], I knew then that he was the sign that this side quest was ending. The young man was full of faith and not the self-righteous type. This sheep wasn't lost; he knew exactly where he was, hallelujah.
And so this quest has, for further info concerning the discussed food topics mentioned here, please see these links below, the first of which comes from Riverside. It is the hope of this writer that the added info and opinions will be researched and incorporated into a whole Riverside nutrition online seminar program.
Now back to our regularly scheduled cannabis fight. Ding!
Posted by Bill Gould at 6:37:00 PM