Great show, a little something for everyone. 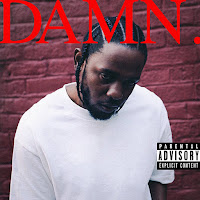 I really liked Kendrick Lamar performance, Elton John and Miley Cyrus were great. Not sure why Ed Sheeran won, that is bs, and I even like some of his stuff. Logic, Khalid and Alessia Cara were fantastic. I thought Kesha and group did a good job. SAM SMITH was awful, but I don't care for his voice at all. I hope that Cardi B goes away soon, not a fan; that said Bruno Mars did a great job doing the 'Bruno Mars throwback jam' that is the thing at the moment.

P!nk was ok, I usually like her performances more. Patti Lupone was fantastic. Lady Gaga was solid. Sting and Shaggy was just bleh, and I feel nice by saying that. I like that Little Big Town song, but the performance was off somehow. U2 was ok for a few frozen guys on a barge in the hudson. They looked like 4 guys wishing they were performing in LA on sunset instead. DJ Khaled seriously needs to STFU and let the singers/rappers do their thing.

Luis Fonsi and Daddy Yankee did a good job with a song everyone has already heard too many times, I'm glad Justin Bieber wasn't there. Childish Gambino did a good job. SZA was good, I'm not fully on board with her yet, some of her songs are 'eh' IMHO. Chris Stapleton is bad-ass. Jon Batiste & Gary Clark Jr were good, but a bit subtle for me. Unfortunately my recording glitched and I missed Brothers Osborne, Maren Morris & Eric Church live. Just watched it, Brothers and Maren are great.
Posted by Bill Gould at 10:54:00 AM

ARMING THE CHOIR -
BSC, CA – It was another road trip for that other dynamic duo, Juanesto Fuego y Amigo, professional outside agitators in league with others who fight for our future – the kids. This is cosplay-for-real, with the role of a costume traded for a true life story and a noble heart as your power battery.
Though official legislation* is the reason for our rally gathering to kick off the idea of that legislation, casting an eye for said sponsor and visiting our governor as constituents was sought as well. The reason: paid corp lobbyists, cough, Monsanto, among others, kiss up early in the year to introduce crafted lies for profit over people projects. 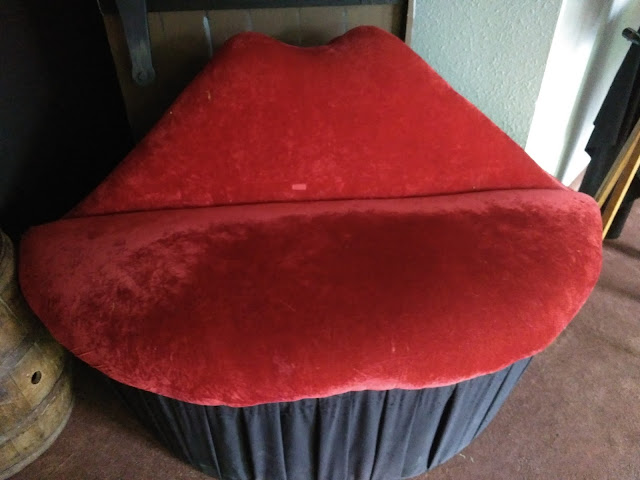 After a day of reaching out to every State Assembly person and Senator who maintains an office at the Capital with the campaign promise from everyone's staff to pass it along [meaning almost no one refused our info sheet flyers**], we were tired because real life isn't Gotham City. However, if our life is a comic book in some yet-to-be-discovered CERN attempt, this rally was the chance to meet a real Justice League; heroes who are super in their efforts to wake up California and America/the World to the dangers of Glyphosate, now Prop 65 certified.With emotional eyewitness reports and homespun ditties from artists who write from the heart, we delivered justification and made fond new memories with the next generation.
Since the days of politicking for Prop 37 a policy of not phoning it in has been the calling card of our odd couple demeanor, illustrated by this gag picture shot the morning of the rally preparation. 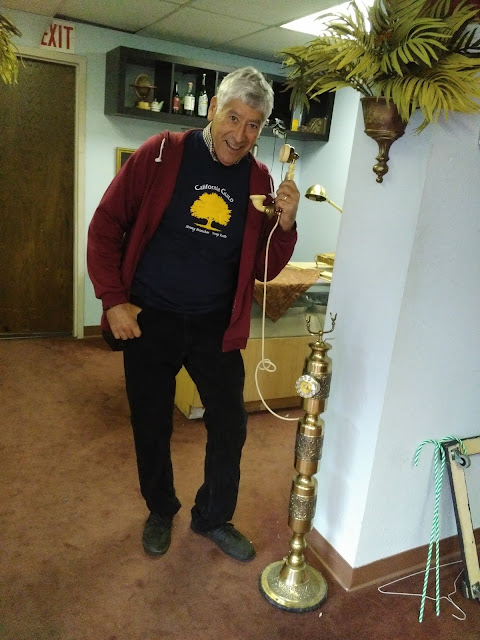 It was chilly, cloudy, and nondescript as we set up for the day's rally. 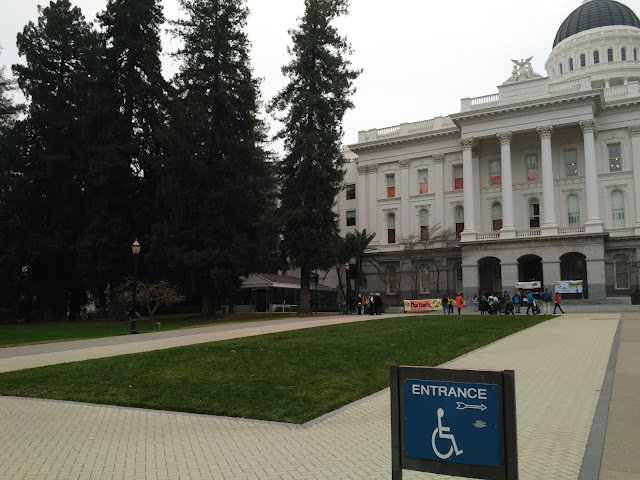 Sound checks were made for our multi-lines of live worldwide broadcasting since we had some internationally known personalities, 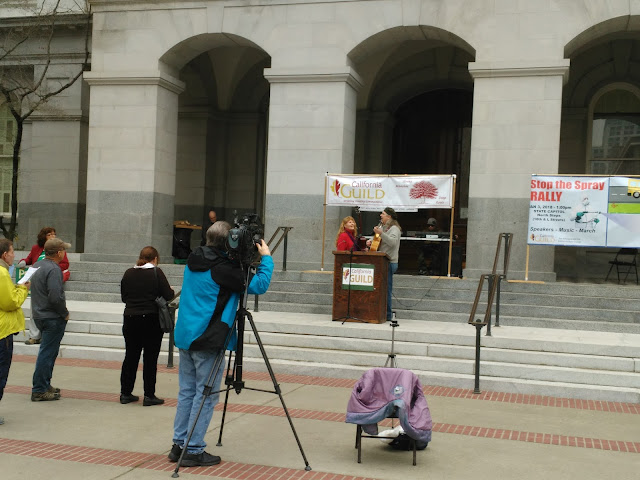 As well as 2 rising stars to introduce worldwide. For Batman cosplay fans, can you spot these lady warriors in the picture below? Stay tuned for clues. 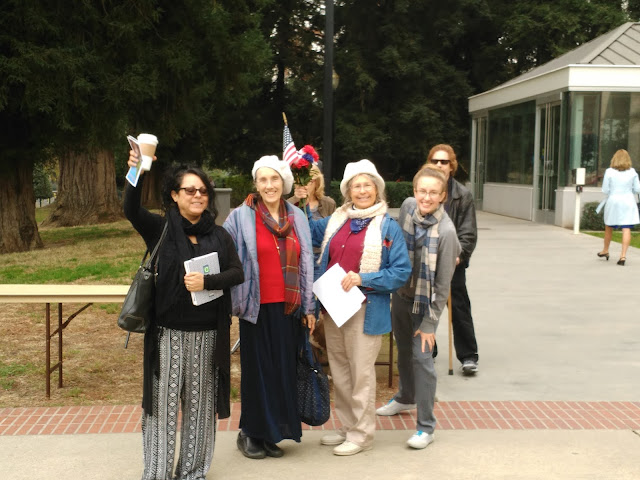 Soon we had our line-up of the unusual suspects; charming and riveting speakers all. 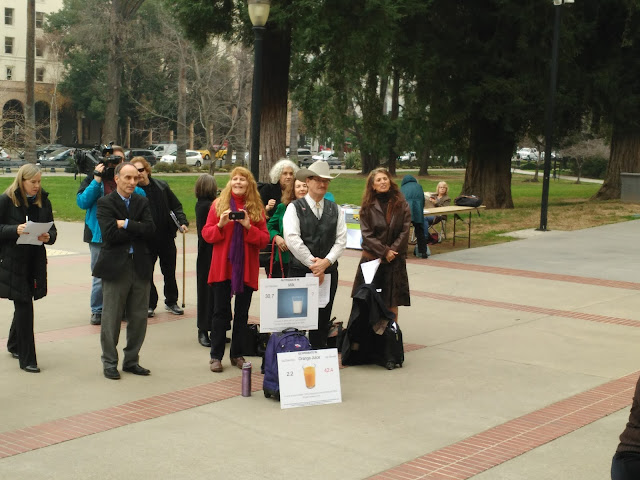 So we put on our game face and the rally began. 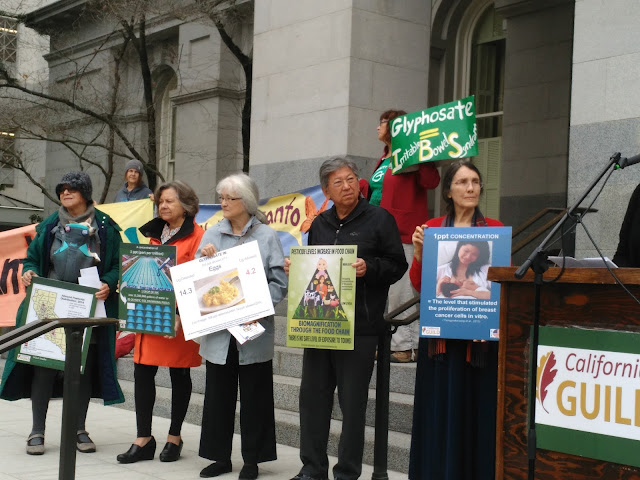 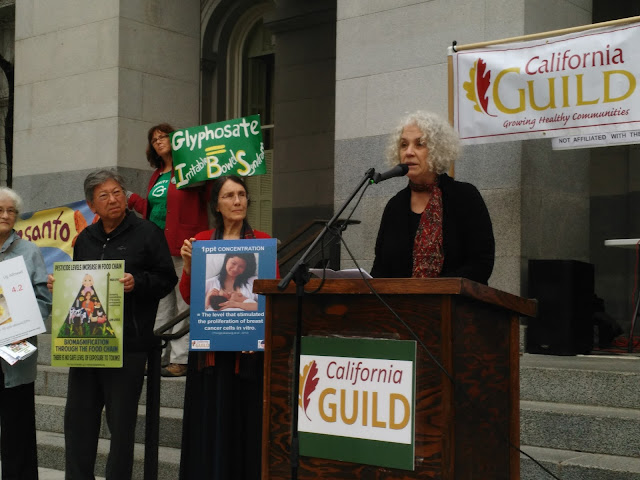 Next up was Iowa farmer, Howard Vlieger, who learned about being organic at 21, the hard way. 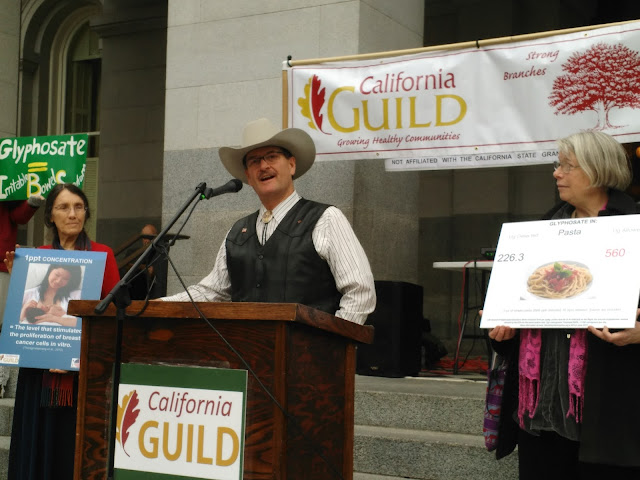 Afterwards came Michelle Perro, MD and co-author of What's Making Our Children Sick? This is a down-to-earth look at our industrialized food system. Again it was personal experience but through child patient results as a pediatrician offered as proof. 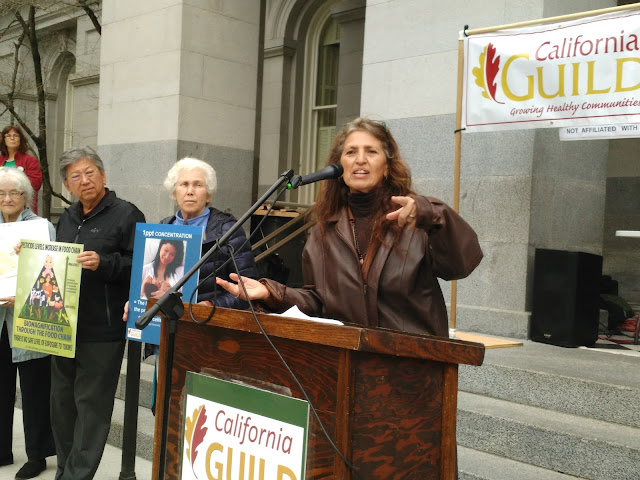 Internationally known author and film maker Jeffrey Smith was the next powerful speaker. 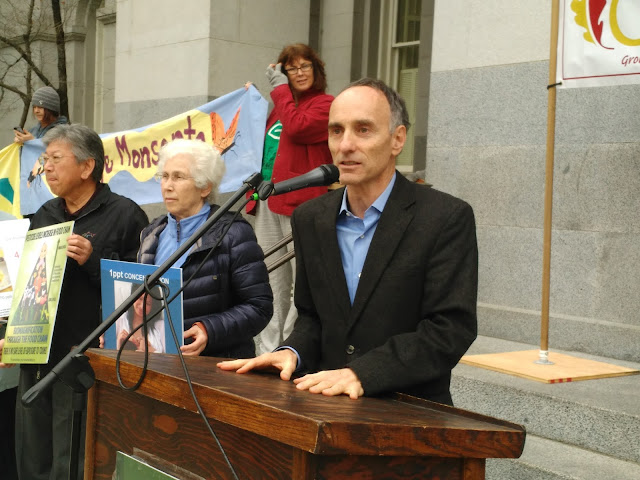 No one can deny the mutual admiration society we all belong to, no matter the level of involvement. 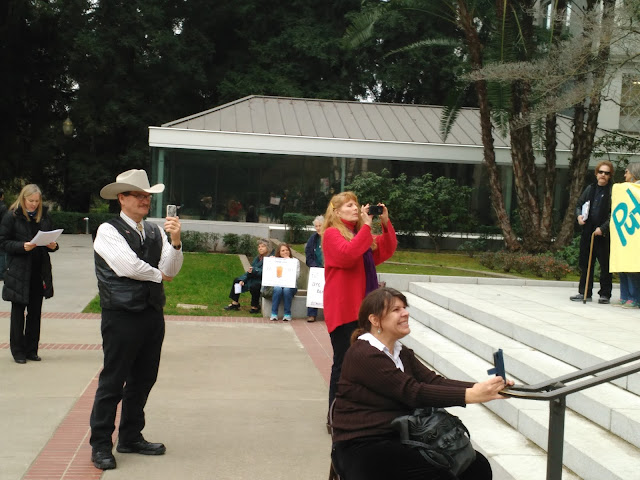 And who wouldn't be when you can see people who may one day replace the Georgia Guidestones with their own statue in a park, like Kathleen Hallal, upscale and classy enough to get the City of Irvine to switch tactics in their weed program. 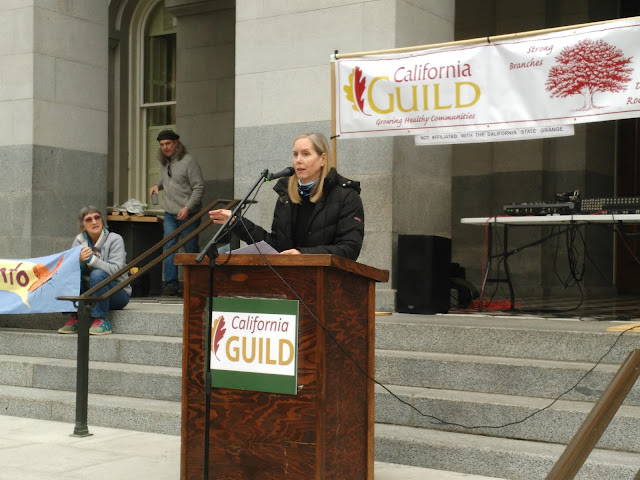 And speaking of involvement, two new faces hit the world scene via this broadcast around the globe. Remember our earlier photo question? The first new face to go national was another mother who also got her city to change their weed eradication techniques. Presenting from my former valley neighborhood, Menifee's Lisa Almendarez-Germo, seen here getting a hand from one of the troops. 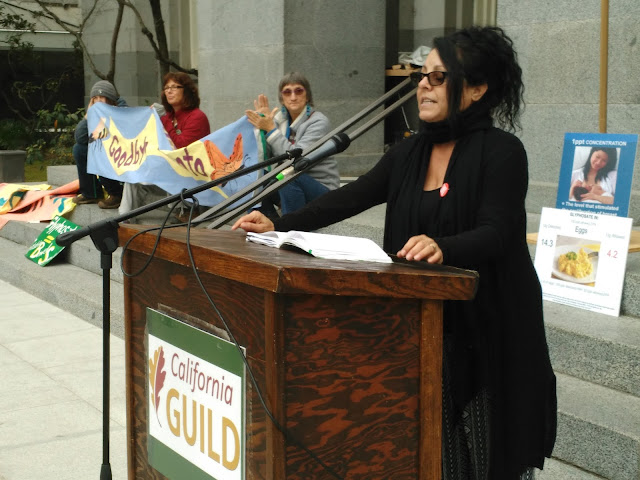 Another Moms Across America veteran who stood up against the same oh - same oh and started a group of concerned moms in her hometown, Lisa was the only one to provide the answer to an audience question involving a shill using Prop 65 for misdirection at the later workshop. Lisa lost her mom to cancer a month ago.

No cause can move forward unless they tap the future. We fight for the future but our last speaker is the future, college sophomore activist, Emmett Koppe, whose personal experience brought her into the mix but also offered up hope for tomorrow. 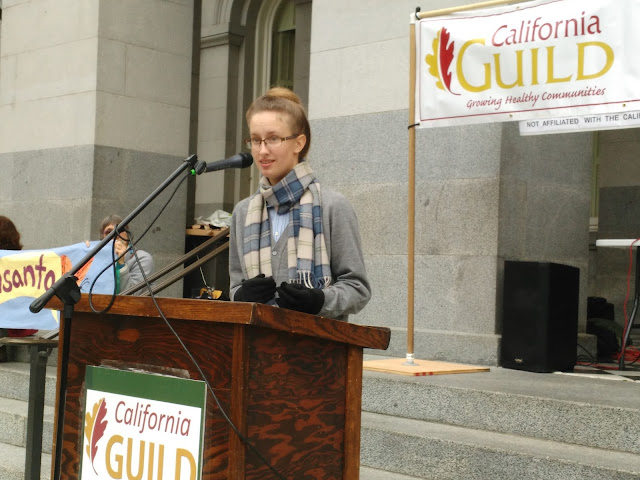 Emmett is an organic gardener on a farm locally who was accompanied by her father, a farmer dad.

So ends Part 1 of our Sacramento rally coverage. Be here for Part 2, An Independent Hope - Meet The Troops.
(* - Present law prohibits spraying between the hours of 6AM -6PM weekdays only. ** - It was the first day of the Legislature therefore no elected members were actually expected to attend the rally or workshop after. - Ed)
This part 1 is presented by those who love live music that is real, the Carmichael Bella Bru cafe. Start the month off with tonight's show, Vintage Fair, at 7:30PM till 9:30. Future shows same time slot each Saturday: January 13, Albertson Duo; January 20, Todd Morgan; January 27, Sac of Soul. For more info 916-485-2883. [version 2]

Cremains of the Day - A Book Review

After divorcing her high society husband, Tallulah Graver turned her party invites into cleaning invoices.  Forced to live in the apartment above her parents’ mortuary and struggling to make ends meet after years of living the high life, Tallie thought her life had hit rock bottom.  That is until she finds her ex-husband in the alley after taking some volts to his nether region for which she is now the prime subject.  Add to that a dead former frenemy and current house cleaning client, Tallie is in some serious hot water.