SEQUEL TO BIRD WARS -
BSC, CA – Yesterday morning a person climbed atop a roof in the 804 complex on the East Side by the mental health center and fired about a 100 rounds into the car windshields in the parking lot below, an eye witness reported to this reporter. The incident resolved itself without anyone getting shot or wounded. The gunman wasn't aiming at people, just car windows. Perhaps this was our Easter miracle.
In other news, a site I watch named Secure Team 10 post mostly UFO sightings from around the globe and outer space. Occasionally they also show a segment that contains just something strange, like water disappearing, cracks in the earth, the affects of wireless proximity to plant growth, and most recently some strange behavior in birds to our north, in Oregon. It seems they are missing. 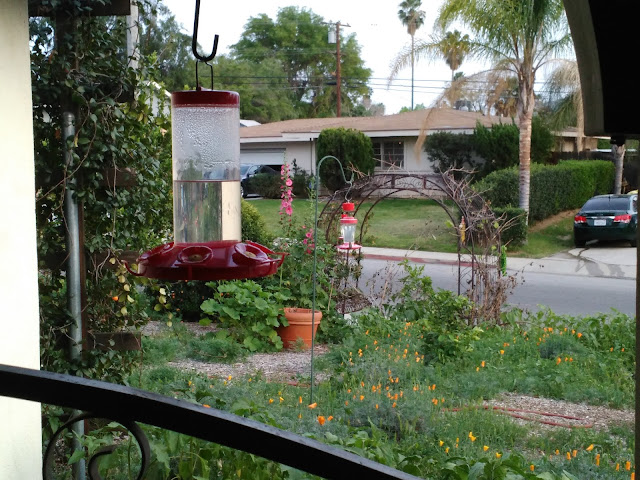 Some of you know that where I stay, my part in residence is feeding the hummingbirds. Unlike the feeder I maintained back in Murrieta, where I am now there can be 12 at summertime, so I keep a notice as they have to be filled almost daily [or nightly since they need to be full by first light]. This is much akin to having a newspaper route. Now what was once Union Station has gone to Salton Sea. I'm wondering why.
Before the tsunami hit down in Malaysia, the tourist ride elephants headed up the hill away from the beach, carrying their lucky passengers with them. I'm wondering if a similar thing could be happening now. This time the event would be Yellowstone or its caldera, erupting ten times worse than Mount St. Helens. 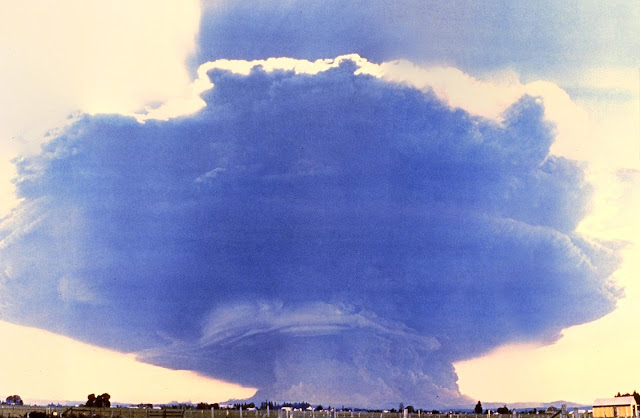 Of course, having Easter fall, this year, on the Pagans' New Year, April 1st, 'April Fools Day as it were, is somewhat unsettling as well, given the current world state of affairs. Do the birds know something we don't? 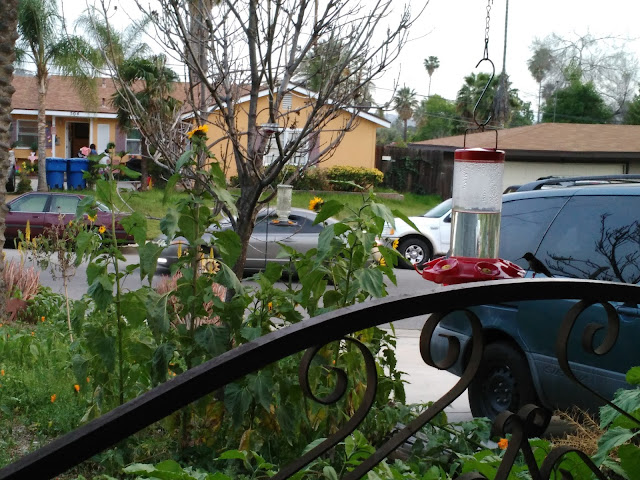 VOYNICH MANUSCRIPT MOVIN' WES -
BSC, CA – As I finish up the details on Bird Wars, another pair of recent discoveries have surfaced that merit attention, Sports Fans. The first is the revealing of the Voynich Manuscript.
For what the Voynich Manuscript is, there are two short videos after the jump that give you a before and after frame of reference. The question of why hasn't this been deciphered before now could be the stilted frame of view for establishment academia resulting in staring at a puzzle to something as esoteric as a prediction my grandmother said about all Man's secrets being revealed in these last days. 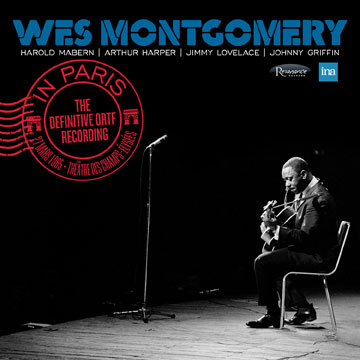 The second discovery is a CD selection of the only European Tour ever engaged on by jazz guitarist Wes Montgomery. For research I was listening to some early Stevie Ray Vaughan [live] and one song sounded very Wes Montgomery in style and verve. Some quick detail checking reminded me again that SRV listed Montgomery as an influence. One thing led to another and voile, I chanced upon a live concert I never know existed though I had some Wes when I owned vinyl back in the day.
And now without further ado, here's the inside story of how this CD production came about.
European audiences had eagerly wanted to see Wes Montgomery perform live, but his severe fear of flying had kept him in the states, where he played in mostly local clubs in and around Indianapolis. This 1965 European tour was the only overseas trip he would ever make, just after his forty-second birthday, and just three years before his untimely death.
According to Harold Mabern, this rhythm section was a relatively new group, having only played a handful of gigs prior to their European tour, but they were very tight and had a great time. "Most of the stuff was spur of the moment; that's what made it fresh then, and it's still fresh now. That's why it sounds happy - because we were happy, and it was all about the music."  [Order here]
And now the Voynich Manuscript. First what it was. The mystery starts at 15:20 approximately

LIVING IN THE SUBWAY SHADOW -
BSC, CA – To attend the meeting about the planned landscape bordering Blaine St., Watkins Dr., and Canyon Crest, I had to find the heart of UCR's campus, an area known as The Hub. Walking into that building and looking around, a lot of pieces concerning young Riverside's GMO/obesity epidemic came into focus. Amidst the crowded lunch room area which was bustling were the corporate giants Pizza Hut, Subway, a brand name that has more outlets than Starbucks it seems in the Riverside area, and Starbucks.
As I made my way across the area to seek out the meeting, I remembered when I was one of them, enjoying myself with a 38” waist, not knowing that it was the GMOs and HFCS making me obese, turning me into a rollie. I rode up in the elevator feeling like I was in the movie They Live. 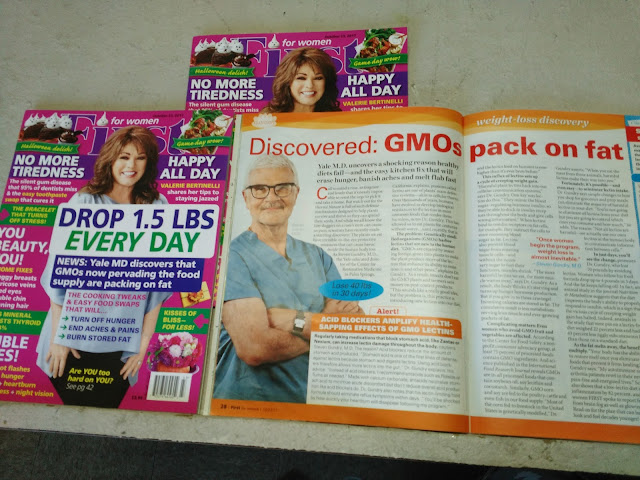 Upon entering the packed meeting and seeing the proposal plans and mock-ups, you understood the pie-in-the-sky notion that one day the University will buy out the neighborhood just across the tracks is a pipe dream. In this gathering of movers and shakers, the only one from the adjacent hood seemed to be me, and BSC, CA.
No one in the room looked east of Watkins Dr. to me, but I was a newbie. 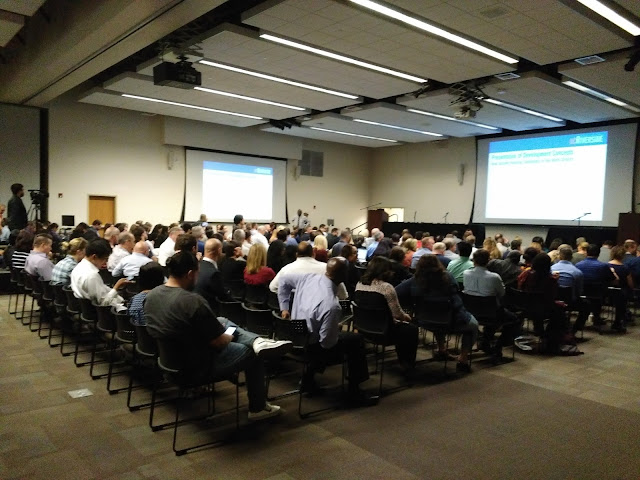 The meeting started with a brief lunch, buffet style and time to peruse the imagined campus project to come. 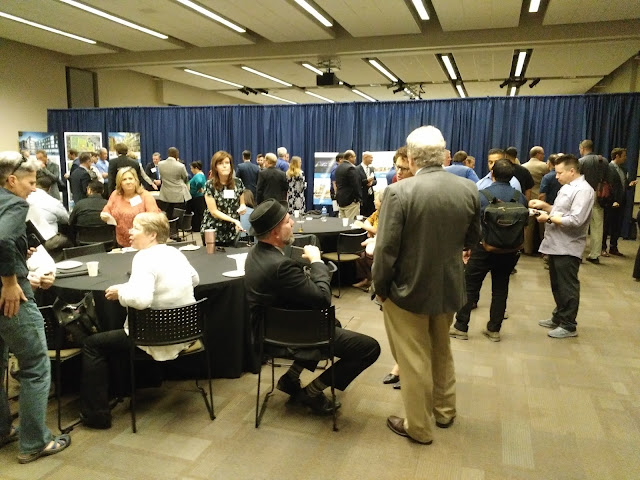 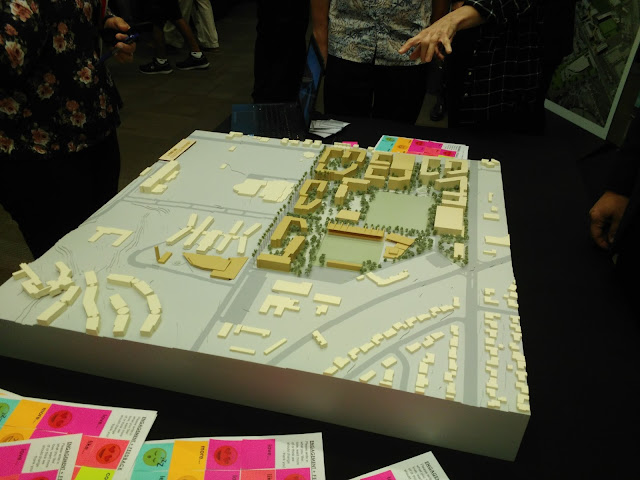 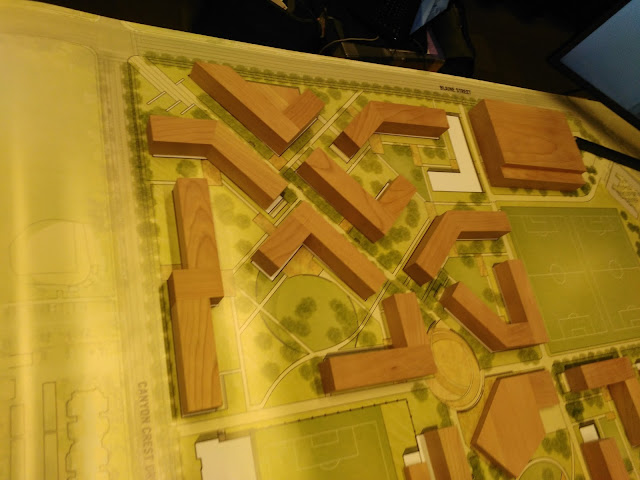 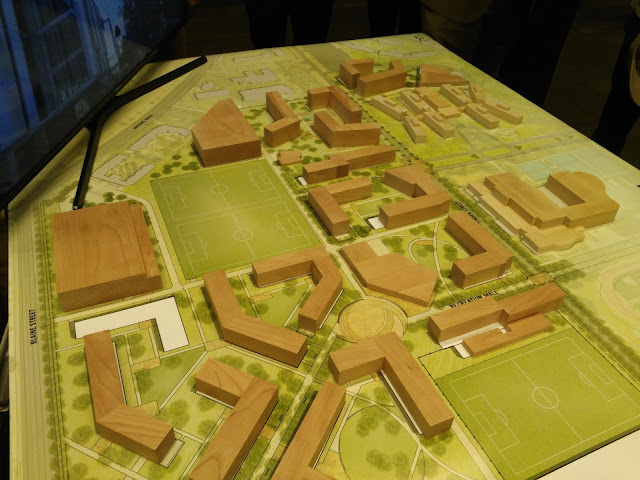 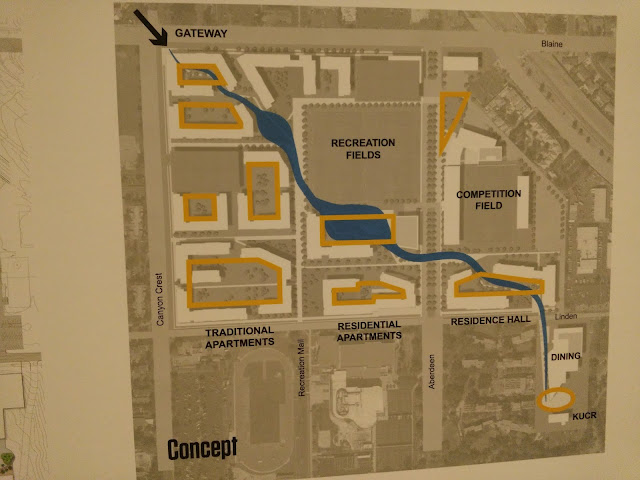 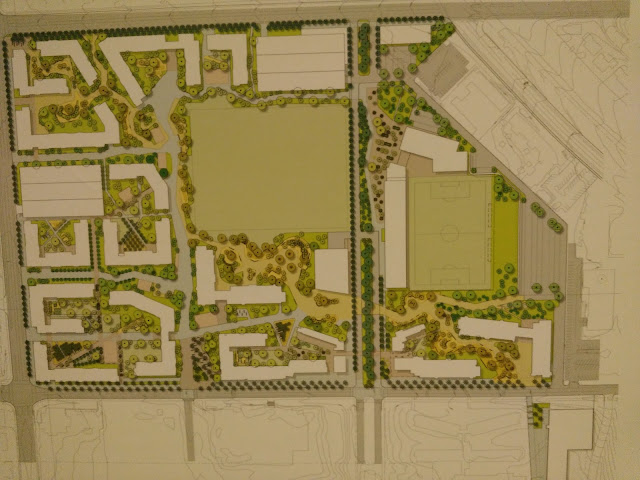 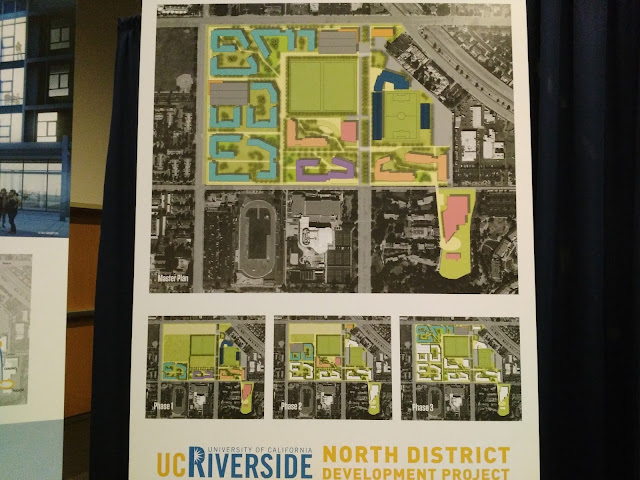 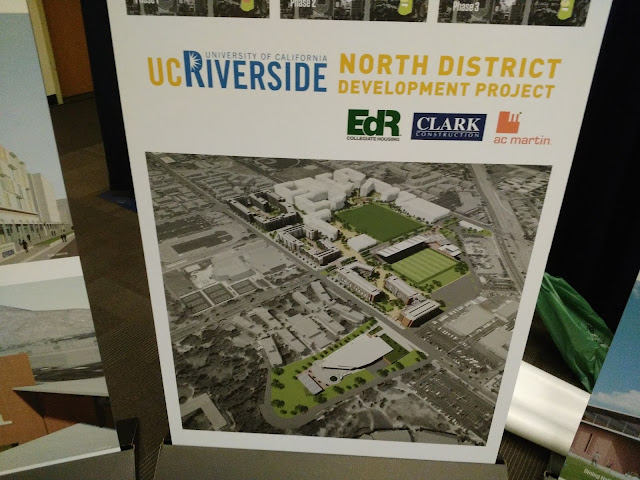 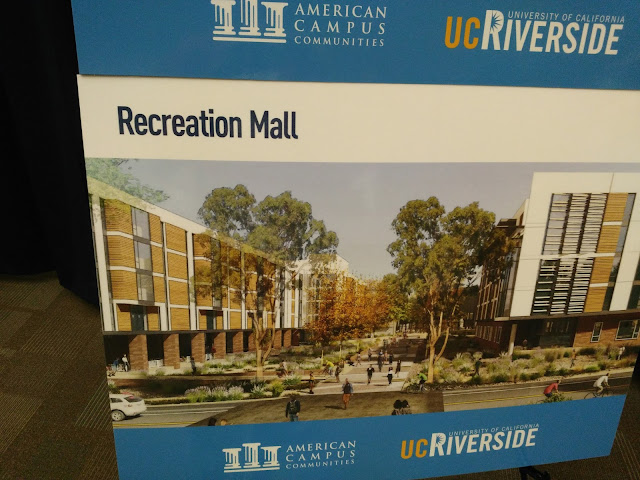 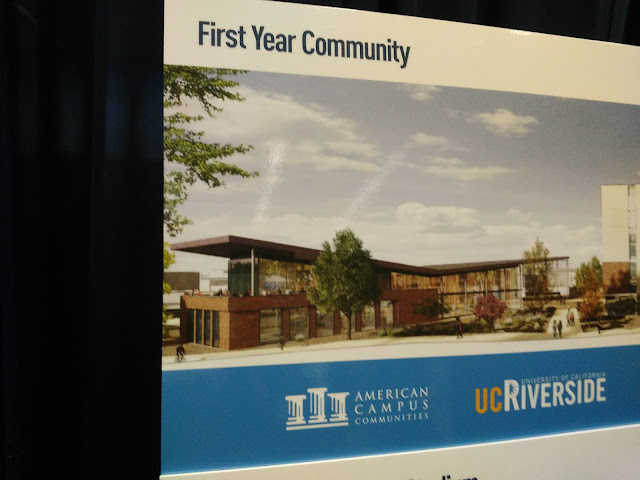 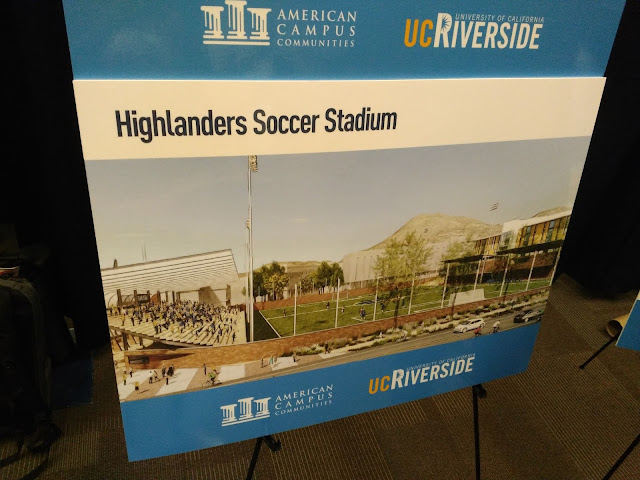 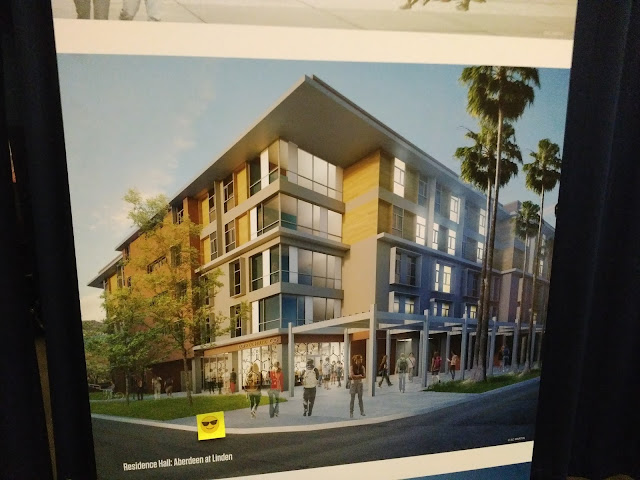 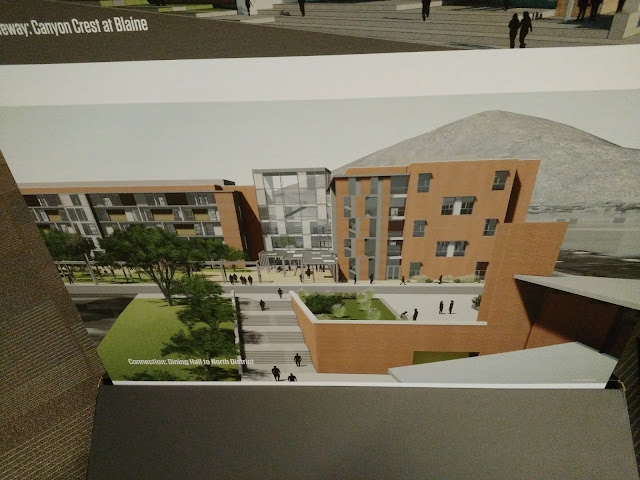 The renovated area even has a new name. 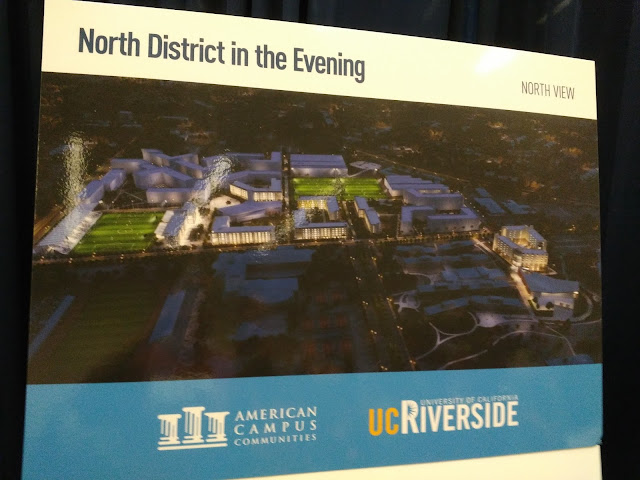 If the American Campus project moves forward, this will be the view looking up Blaine toward Watkins Dr. in the distance. Retro Jetsons, anyone? 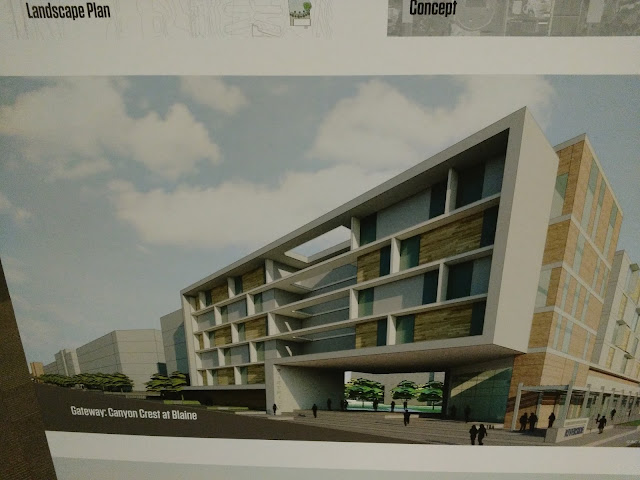 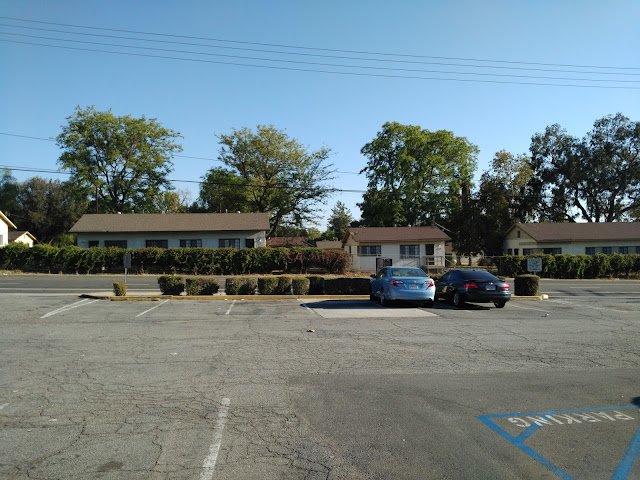