MELISSA BALIN LITES UP LIVE STREAM -
BSC, CA – Coming off a surprising late week news rush, see next story, I had no time to research and write it up before my next assignment hit, return to NoHo [North Hollywood for any new readers] for the last showing of the 2009 filmed documentary about Jack Herer, named after his best selling, eye-opening magnum opus, The Emperor Wears No Clothes. The film was produced and co-directed by Melissa Balin, seen below. 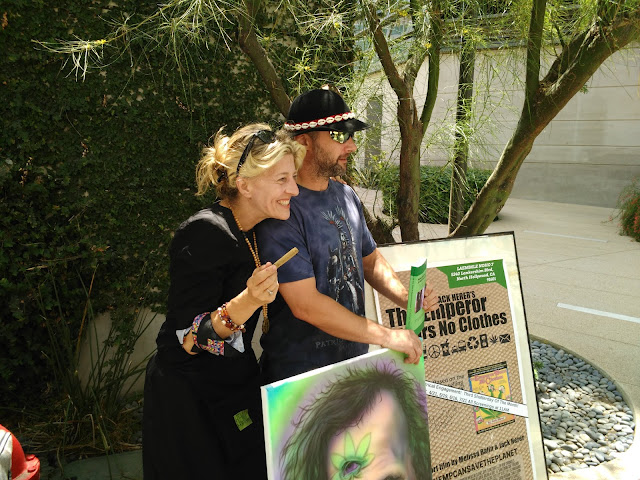 As I said, coming off the news in the next story and my smooth Friday the 13thtrip through NoHo the week before gave this visit a different verve. Because you have to remember, LA is a strange town, an international town. So it can be as enchanting as a faerie [fairy] circle. Feelings like this don't smack you in the face, they linger like a scent. And no one can say this NoHo gathering for the last showing isn't a curious lot, starting with Melissa, whose aunt was a show biz professional.
The Crocodile Dundee-looking individual standing next to Melissa in the shell band hat did have an accent. His family had a direct tie-in to LechWałęsa, the labor activist who helped form and led (1980–90) communist Poland’s first independent trade union, Solidarity. Sebastian Nanya, as it turned out, is a reader and is holding a signed copy of Memoirs of Mr. Pete & Mary Jane Green. I had brought two copies with me like a Bible salesman.
Getting out to LA and NoHo was like grease through a goose, another signal to be on alert for any LA strangeness. Getting to the theatre with the band, I was the first one there. Soon I was in a conversation with two canvassers for Heifer International. Before long, per usual, Richard Eastman strolled in like he had just come out of a portal. I never see this guy get out of a vehicle, a van, taxi, or UFO. Of course, perhaps like me, he uses public transportation, the poor man's chauffer. Like me, he knows the secret about Mary Jane andmoney, aka greed. Though I rarely mention it, Richard is someone I first met at Occupy LA. 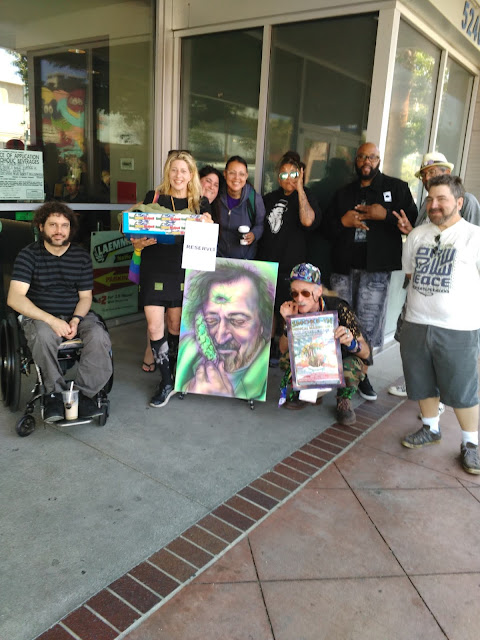 Before long the rest of the crew gathered and we posed for a photo op. The guy in the wheelchair is Richard Castaldo, a Columbine survivor, which happened on 4/20. Rich also pointed up in conversation that the prescription anti-depressants the two shooters were on is what led to the killing mentality, not the 2ndAmendment as the Alt-left mainstream propaganda media dog whistles to get your guns. Once the guns are gone, you're gone; just study history. 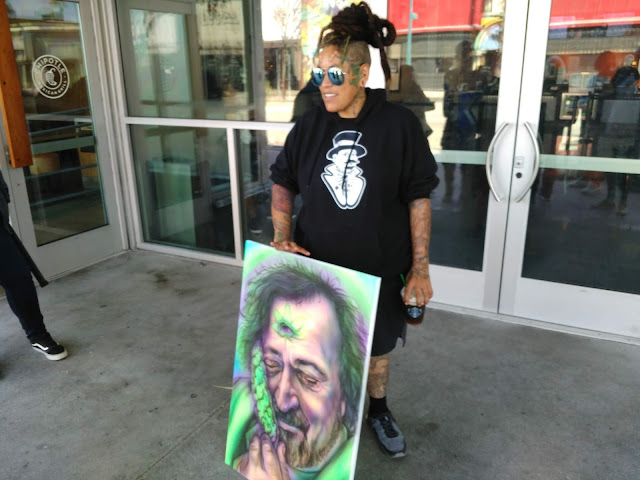 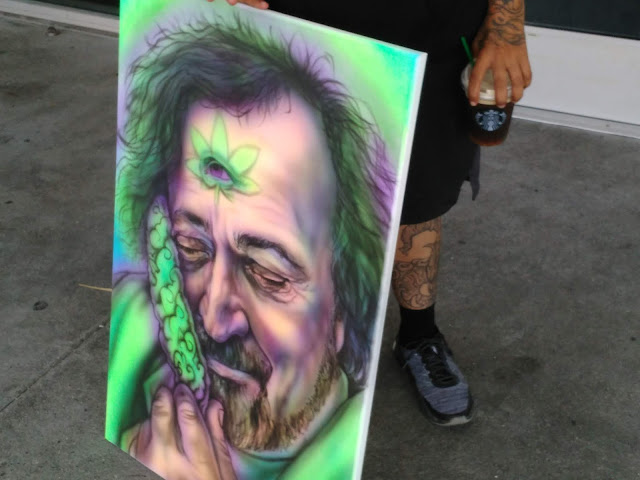 Also joining the Saturday morning movie crew was a freshly done, as in the night before, airbrush portrait of Jack Herer, rendered from a photograph by visual creator Rtispc ['artist PC'], shown above. And remember "Free Eddy Lepp!"? His last assistant and co-talent for the doc, Rachel Cohen Ellis, reported that Eddy got out 2 years ago after doing 7 years in jail. Jack died while Eddy was in prison. Now the terms of Eddy's parole won't allow him to see, aka attend, Jack's movie. As Nick Fury would say, "Mutha--" 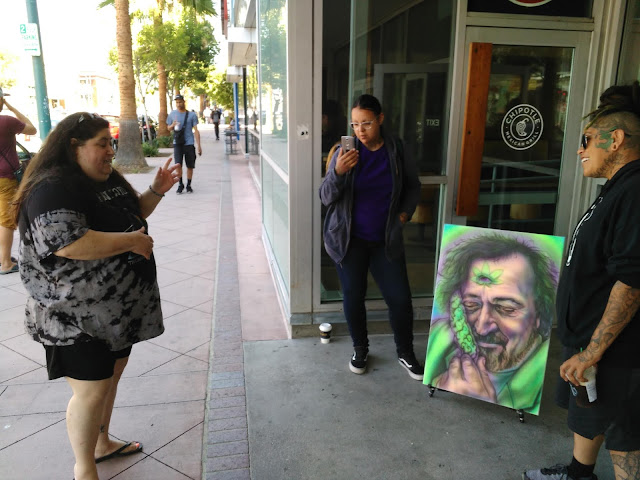 Rachel, above left, related how Jack loved to speak Yiddish with her. Jack, of course, was Jewish. Inside the theatre Melissa live streamed the happening on a number of web sites all set up by her moderator. Here she streams rapper Dirty Birdy against the movie frame depicting George H.W. Bush being saved by the very plant he persecuted, hemp [cannabis] in the form of his parachute rigging. 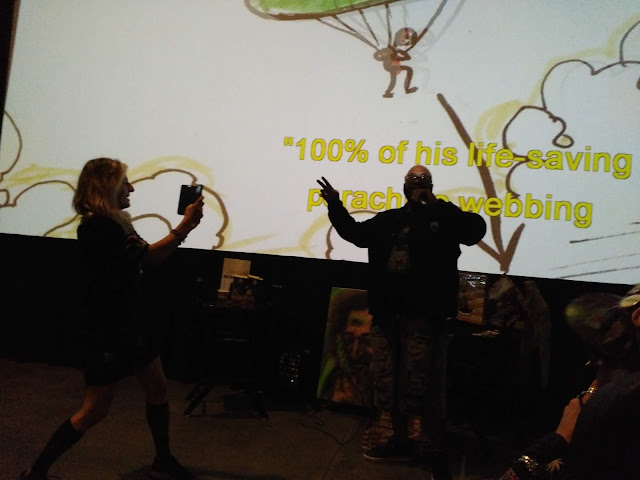 Melissa's film uses real friends of Jack, like Eddy Lepp, to list the various products and uses for cannabis and hemp rather than show the long history of cannabis or Jack's personal involvement into the cause. It was this very theme and the Hemp Against Hitler campaign that the Feds tried unsuccessfully to hide which brought me to my present understanding about the D.C. Overlords. Well that and the smallpox-infested blankets given to the Native Americans during the winter by the Calvary. Yep, yep, another Nick Fury mutter. After the showing it was time for another photo op sesh on the sidewalk out back. 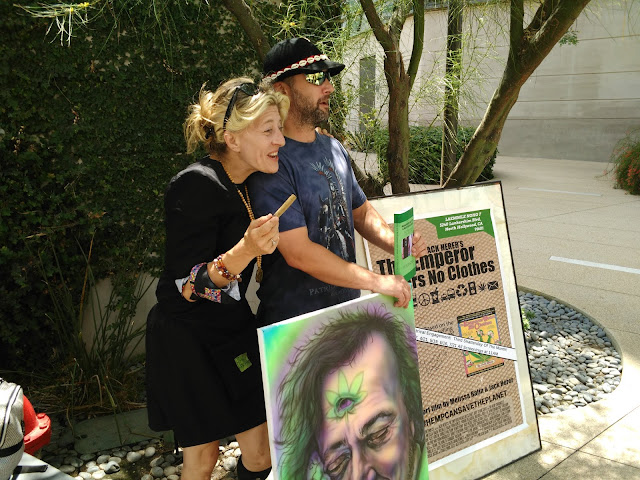 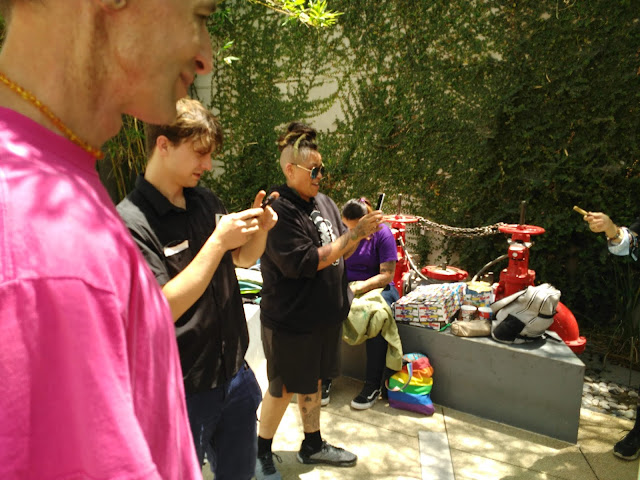 We acknowledged the the person bringing us all together, who was also holding a kief encrusted blunt from a sponsor. 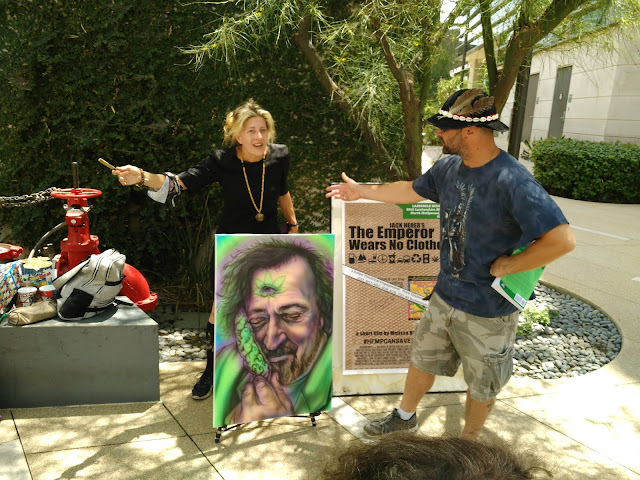 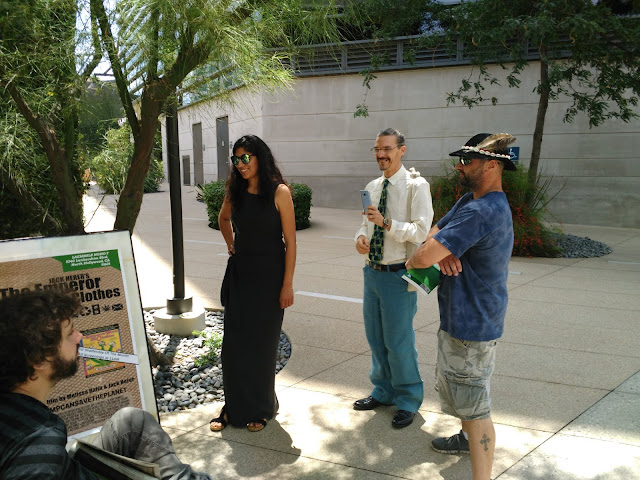 Then it was time to call it 'a wrap.' 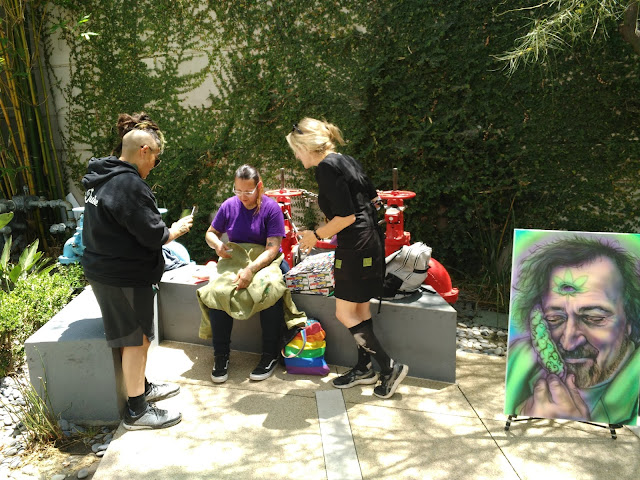 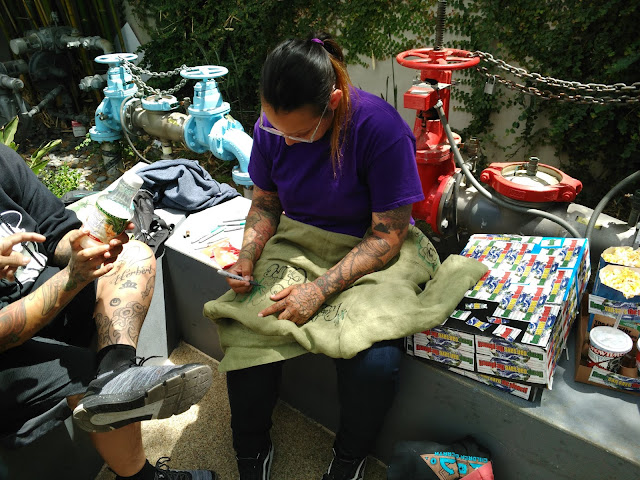 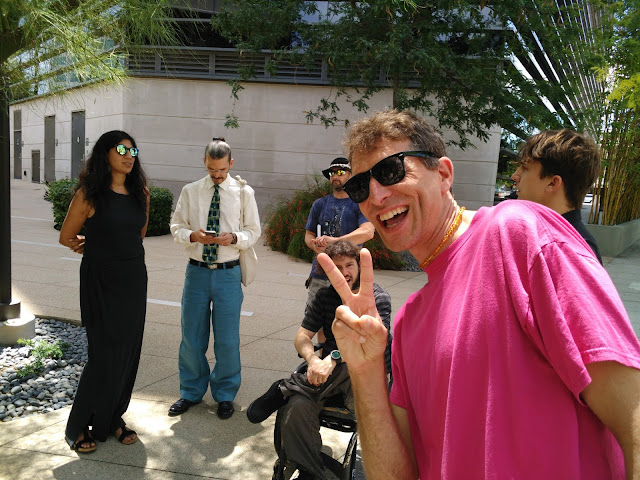 Then it's 'Fire in the hole' as Richard sparks up his own after passing out a nug from last year's harvest to everyone present. 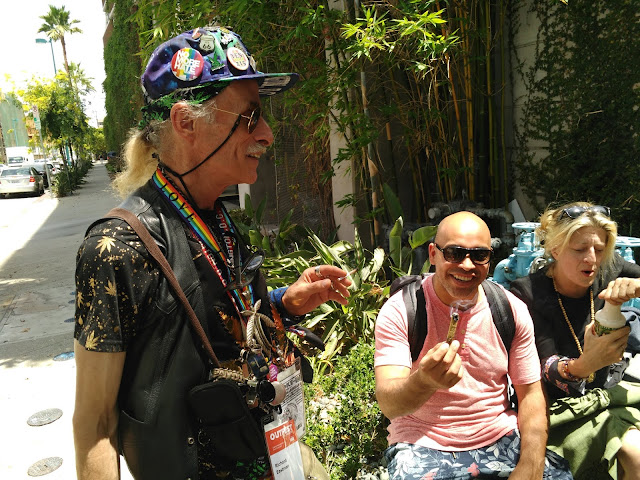 By the way, the gentleman holding the blunt is also the sponsor who supplied the blunt. A sample joint was gifted to everyone there as well. A quick chat later and my second signed copy of Memoirs had found a home.

After a quick glance at my phone for the time, I bid 'farewell' in a haste before realizing that the zigzag path to our spot had completely thrown off my direction. I hustled off to find a familiar street or landmark.

Locating my bearings I made my way post haste to the subway, mentally checking the stopwatch in my head. My train pulled out at 3:15. Miss this and it was a 4 hour wait for the next one. After the subway made a couple of stops [I was riding to the end of the line - Union Station], the LA moment happened. 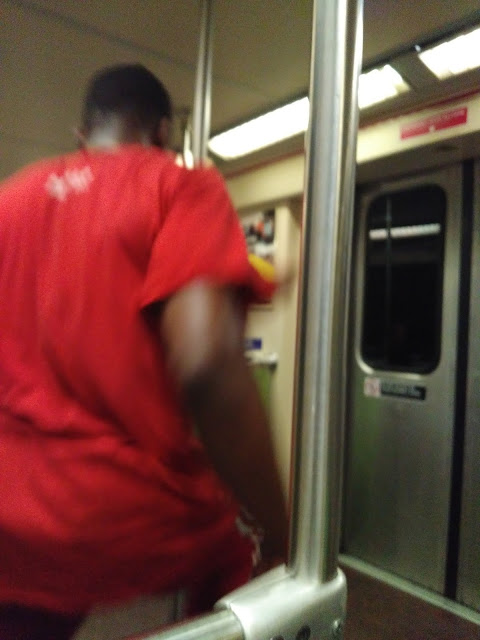 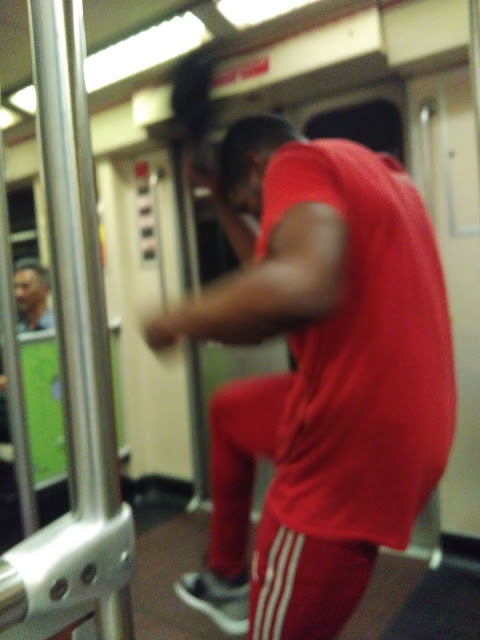 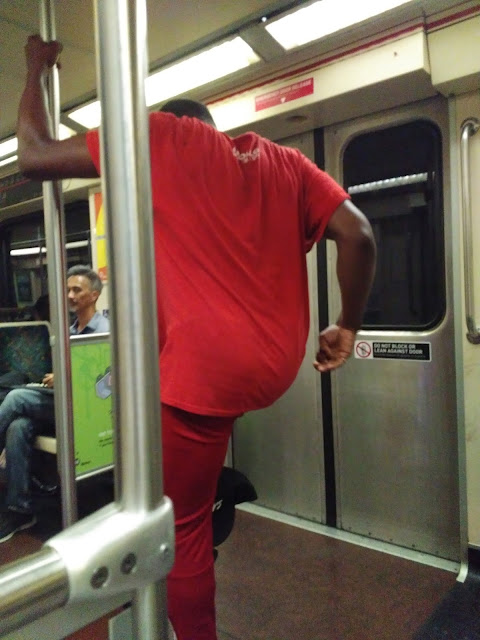 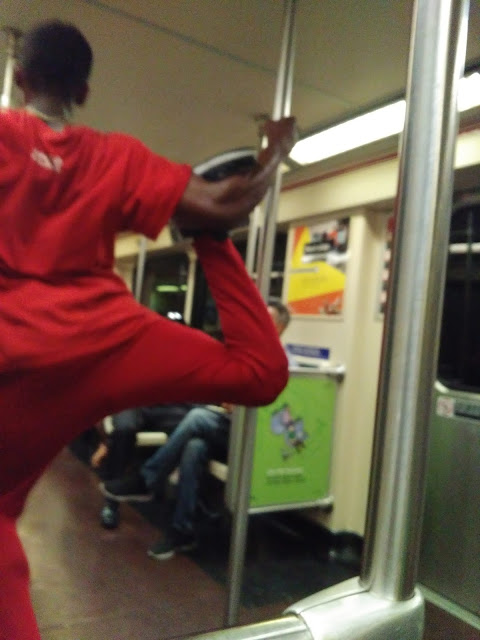 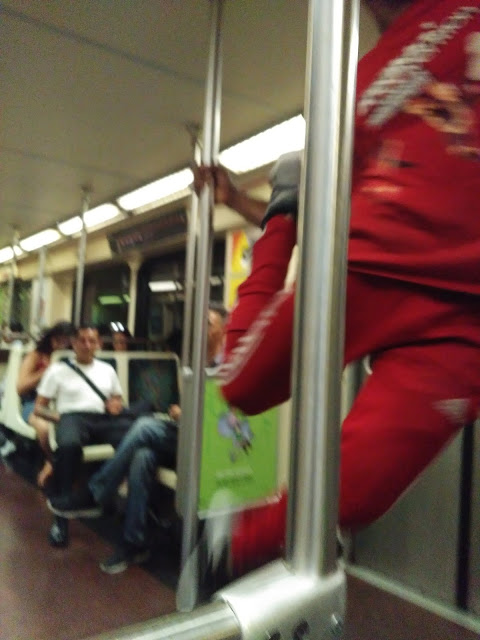 Skipping the incense merchant onboard, I tipped the live entertainment, encouraged that doing so satisfied the artistic Spirit of LA Karma. Sure enough, when the subway pulled in I had just enough time to tread my way to the gate and run up the sloped platform ramp to board the train with 30 seconds to spare.

I love LA, always a show. This one goes out to you, Jeff. It's still crazy after all these years.

DO THE MATH, #8, #4, AND #1 -
BSC, CA – If you are anywhere in southern California, you are indoors. It's hot, hot, hot and I don't mean that in an eye candy way. Here in Riverside after a pleasant spring into the first week of the season, it went from the 90s straight into the triple digits. LA was even worse because they had humidity with the heat. [How bad was it? People were driving around in air conditioned cars handing out cold water to anyone outside walking. I know, I was one of those walking.]
One of the tastiest ways to cool off even at the beach is with ice cream, as in a malt or a shake. And when it comes to great shakes, not the DQ ones but the ones that get ranked as great shakes, Palm Springs lays claim to the Number 1 in the land, aptly named what else, Great Shakes. But what's this? I was in Riverside. Another tasty mystery for this 'Lois Lane' to solve. 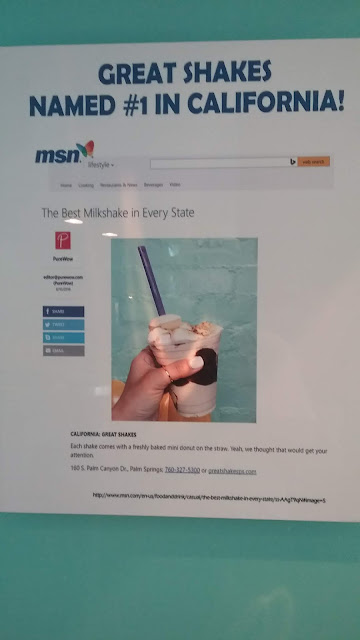 And the ranking: #1 in California, #4 in America, #8 Worldwide. Not too shabby. In the Riverside Plaza restaurant row, at least three other spots offer shakes and malts, so I was curious as to what makes this shake so great? Make the jump to find the answer.
The Great Shakes in Riverside Plazanext door to Blaze Pizza is the sister shop to the Great Shakes in Palm Springs, being owned by the same family with son, Scott, being the Riverside manager. The hail and hearty crew of smiling faces make it seem like they just finished a great shake. But the down home Iowa atmosphere is just the beginning. Like a well written movie, you need good ingredients. For a great shake, you need great ingredients. 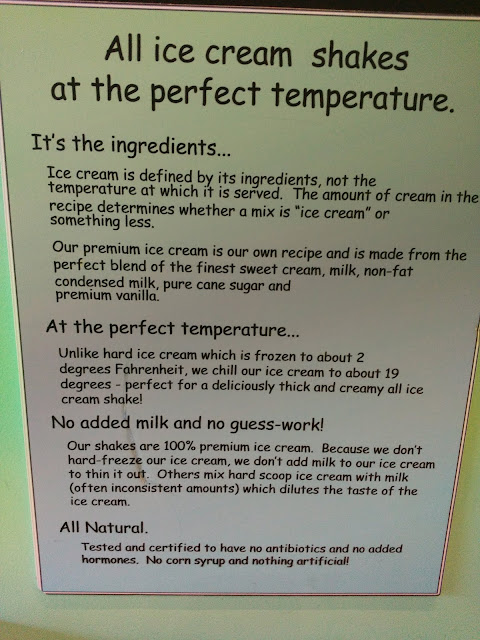 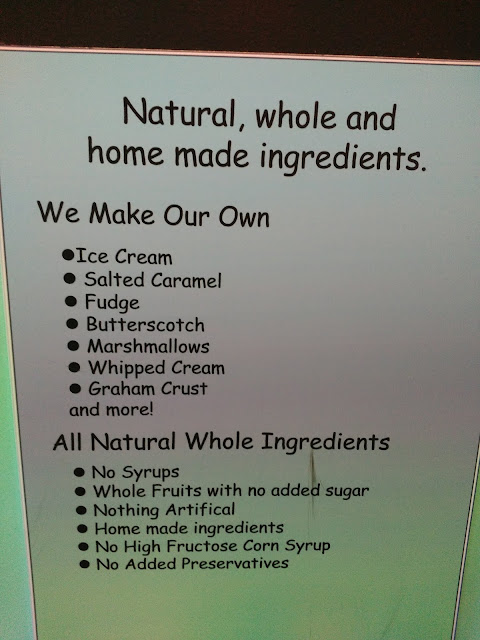 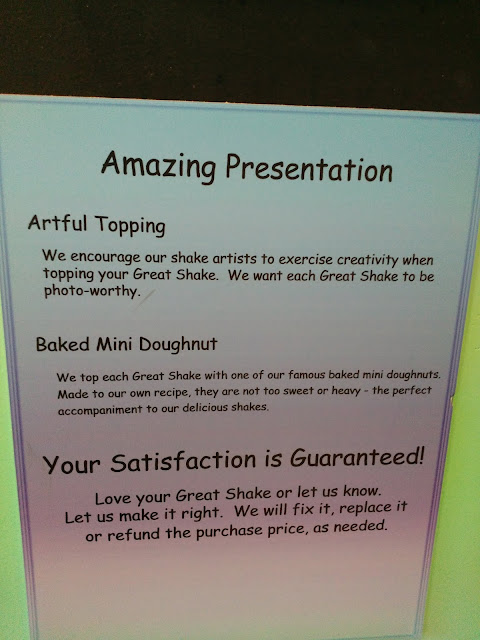 Next, you need a great menu. 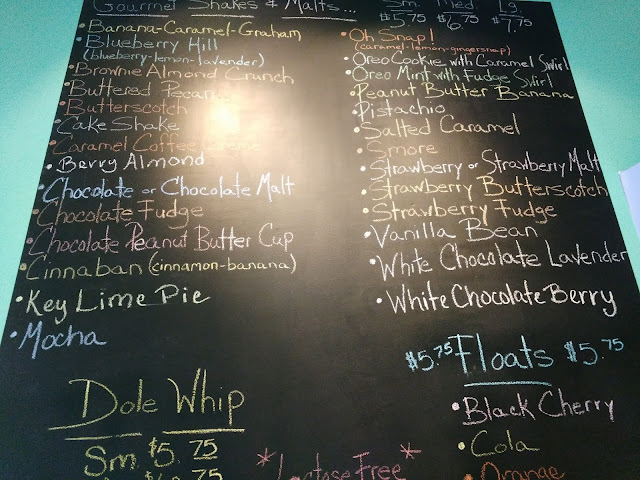 Then a great assortment of real eye candy, especially the old school brands. Where did you park the Oldsmobile? 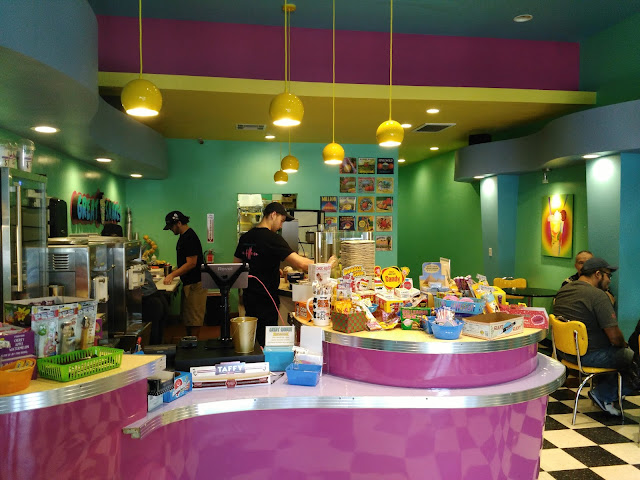 But wait, there's more. For those who like a soda, a great tasting soda made with real sugar, there is a selection of Virgil's available chilled. Also chilled is a Dole Whip, fully vegan and soooo delicious. It's a whipped pineapple smoothie and featured at places like Disneyland. 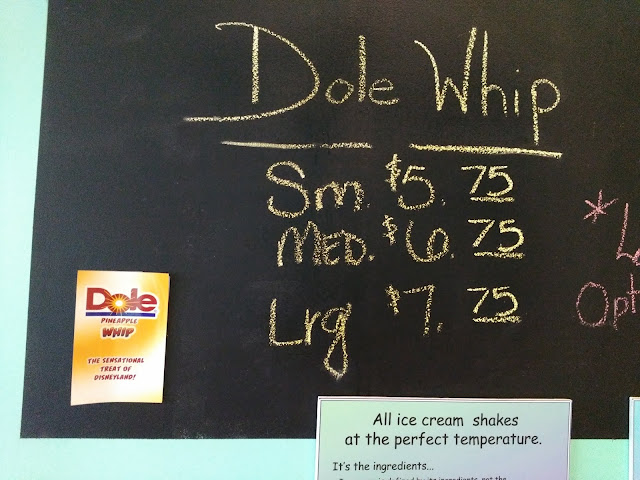 When you step out to enjoy the selection you made at the shaded front patio, you realize you're in a great spot to enjoy a shake, a great shake. And it is. 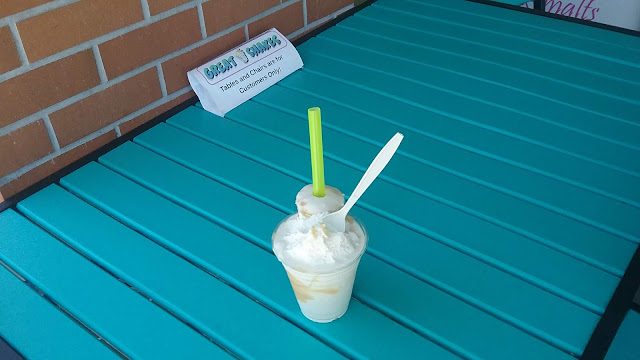