DEATH & ACCEPTANCE -
BSC, CA – For most of us, the word FATE conjures up a deep question to life and what's it all about, Alfie. The new album title for Keenwild actually explains their existence, their beginning, and this present EP concept. Even the magical valley Keenwild calls home shares the word title of their latest album release. Although many confuse 'fate' with 'destiny' the two are really different in meaning. We are all destined to die or perish, but we do not share the same fate because we don't all have the same hopes and dreams. Bill & Jeney of Keenwild met because of shared hopes and dreams – music.
The new album themes are death and acceptance, illustrated beautifully by artwork showing the music's lyrics run from thoughtful to somber, not to be sandwiched in between Celebration [Kool & The Gang] and Disco Inferno[The Trammps]. Keenwild and the music made by the two piece group follows the soundtrack of tunes crafted outside the Top 40 and their past releases reflect songs that are serious,‘Dievercity’, ‘The Long Road Home’, and ‘Sunsets’. This latest 6 song release started with a death in the family. 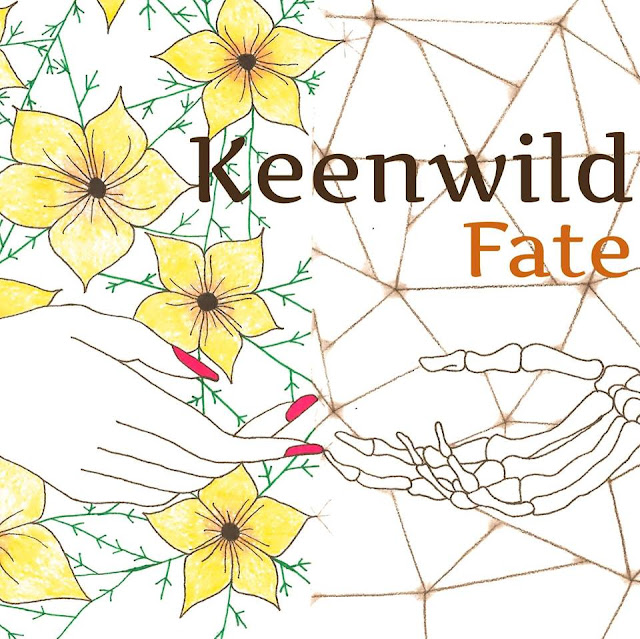 Keenwild's Jeney Kingsbury hails from Kansas and so shares a Midwestern outlook with me, being from Iowa [see Memoirs of Mr. Pete & Mary Jane Green]. Jeney is the voice of Keenwild and has a signature sound that is strong and vibrant, regardless of sound level. Bill Gould, her band partner [husband] is a So Cali native and has always had a thing for music, as in being a part of it and more than a talent. Now he is both.
New readers may be asking themselves just what does Keenwild's new release title, Fate, have to do with this review? Well this, Sports Fans. Though Bill and I met years before he was a name in Temecula, it was the early days in the late 90s, that a young man whom I shared an office space with asked me a pivotal question. Like a patient he wanted a second opinion. His question was simple and complex because it involved fate. Should he look for a career in business or in music?

Remembering the song Mr. Pete[Aussie download hit #2] and seeing the formation of Keenwildlet me know that I had given young Gould the correct advice, “Pick which one you like the best and everything else will fall into place.” Of course, I knew what he liked the best. I may not have known his fate but I did know that we were destinedto meet and influence each other.
As we move to sample the new release, Fate, the idea of fate itself must be addressed between us. Long ago there was a connection established between Bill and I. Fortunately I wasn't a priest or some eyebrows might have raised but being an Obi-wan always gets 'that crazy old man' tag applied. After Bill saw this connection early on, I just smiled and thought of Providence.
Keenwild's other two source themes in Fate for death and acceptance are Bill's Grandparents and a close friend, though the close friend isn't listed. It doesn't really matter, identity-wise, because Bill has many friends in the valley, but for this publication, a Gould venture, there is only one friend who affected us allin the music scene around Temecula, and her story hits numero uno on a regular basis though it is years old. It is the story about Bipsy. If she ever crossed your path, you knew it, like stepping from a shade into the sunlight with your eyes closed.
Bipsy's lead-in picture wasn't in the story at first. This editorial feature was gleamed from the first 420Nurses story done. Shortly after that when I added her photo, though the story had hit the No 1 spot like a specter from time to time, I began thinking about that shot. It had come from my old cell phone and was taken a month before she was killed by her fiance. I started staring at the sunglasses she wore that day. Soon I realized those glasses weren't a fashion statement. They were hiding one, possibly two, black eyes. Why hadn't I asked her for a face shot or to remove the glasses since she was preparing for a short tour? Any type of hesitation may have alerted me and changed history. Bill was the second person in the valley to know the fate of Bipsy. I was the third. Recently I have accepted the fact that I was not destined to change the fate of Bipsy. 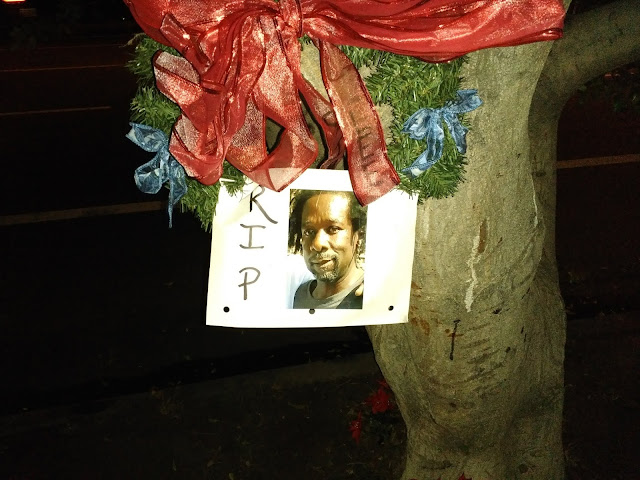 The fate of death this past week hit the neighborhood where I live up in Riverside. The man in this picture, named Lee, was homeless and slept lately on the front lawn of the doughnut shop. He got his meds at the pharmacy in the same small mall and went to the county mental health center also located there. Having been to LA during the Occupy days, I have learned something about dignity among some homeless. Lee and I chatted most times I saw him. We always blessed each other. I saw him the day he was talking to the ambulance first-responders and he didn't look much different, aka standing, talking, etc. The next day word reached me that Lee had 'died in the hospital of pneumonia' from a tip at the doughnut shop. Lee's future and this collection from Keenwild, a strange connection to Fate.
Posted by Bill Gould at 2:16:00 PM