THE DAZE THEY WERE -
BSC, CA – Before the days of CDs, home programs to bring your high quality recordings, and today's 'open mic' opportunities, before MTV even, there were bar bands. Granted, a few drinks and almost any band sounds good on a weekend night, but back in the day, there was one band that stood out because of the members in it. The band membership grew some over the years and also changed a bit, but this band always brought it, left it onstage, and on any given Friday or Saturday night, were 'the best bar band on either side of the Mississippi.' 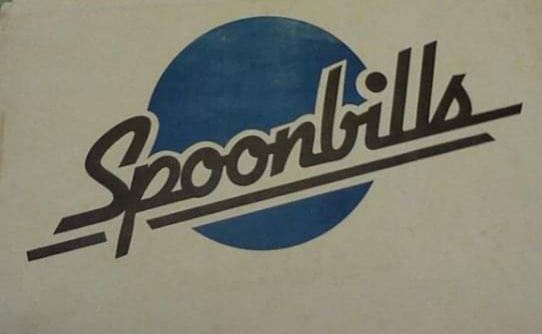 The Spoonbills, as a name and logo, started the enigma that wove its magic through the years into a force which help kick-start a blues fest that goes on today, give or take a year. So what does the name mean? A bird? A fish? Or something else entirely, like the mystery of Billy Shears? And the two eyes looking up inside the 'o's, against a solid 'blue' moon? When you couple this with the art deco, Bix style, end letters of the band name, what do you have???
Only the Shadow knows, and those who know The Shadow, but I digress. After the jump we look at the life of a band, a show band from the heyday of bar bands who blew your face off and made you jump to your feet.
This is the story of the award-winning Spoonbills...
Missing from the article below is that Barry's family is naturally, musically gifted. 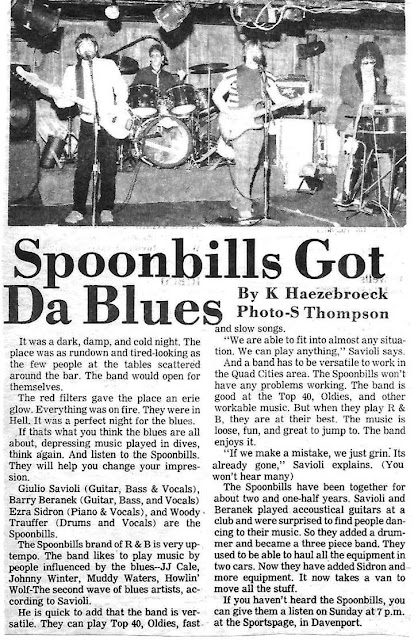 It was during this period that the Spoonbills first entered my life and Memoirs story. While some songs were better than others, all the cover songs were played through the band's arrangement. This is very infectious when married with natural talent and self-effacing attitudes, like Guilio playing his guitar upside down, cough, Hendrix.

July 4th around anywhere is special, but when you're The Spoonbills on the Mighty Miss, well, 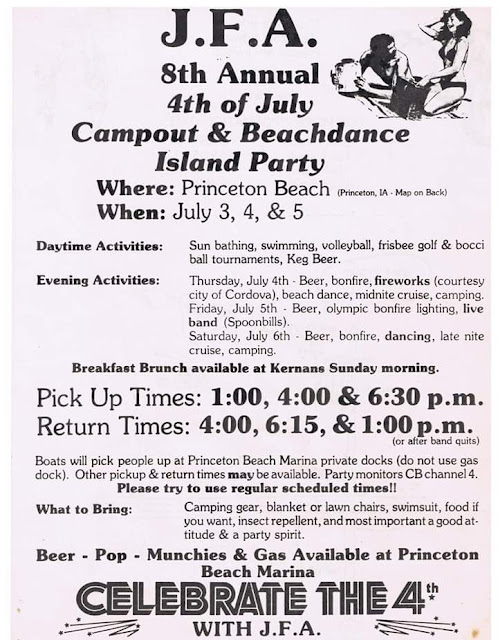 Though these island parties weren't an annual event, I do remember two, and one of those times made my book, Memoirs of Mr. Pete & Mary Jane Green.


However, it is the next two artifacts that tell the tale which musical legends are made from. 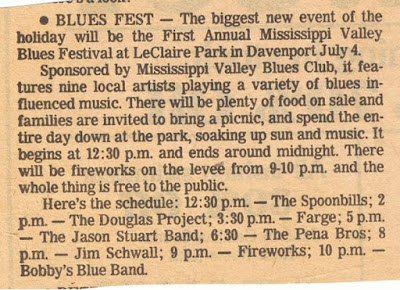 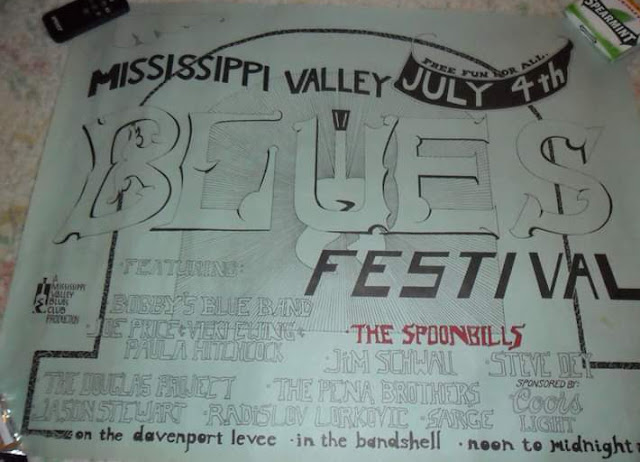 It was in 1985 and the blues had been simmering in the Quad Cities for awhile when The Spoonbills, very instrumental in starting the Festival, volunteered to be the opening act, aka, the 'sound check' band. The 'bills went on to open each blues fest thereafter, in their existence as a band.

Another Spoonbills moment in Blues Fest history recounted, in Memoirs, is when the wolf pack (real names, Kathi, Yolanda, Gloria, and Pete) worked the beer tent. Though the festival was free to enter, beer tokens [custom guitar pics] were a buck apiece. This was the first year the Fest won an award, which seems illogical when you read the actual account. But you can't argue with history or hawking.

A time or two the Spoonbills merged with other band members to form an all-star group of sorts to play the blues festival.

The daze of the Blues Festival in LeClaire Park around 5 PM. To your left is the Mississippi River.

Dean replaced Ezra, who left before Dean came onboard. Ezra played standup piano and sang. Dean, pictured far left below, only sang a limited amount, but he played organ like an old time Sunday school teacher. It was a curious mix to hear at one AM in a bar on a weekend. 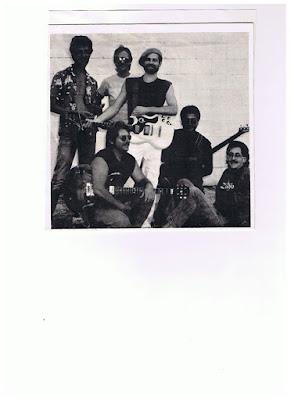 All the ego was pumped into the music performance for the people. The Spoonbills became a local show band. 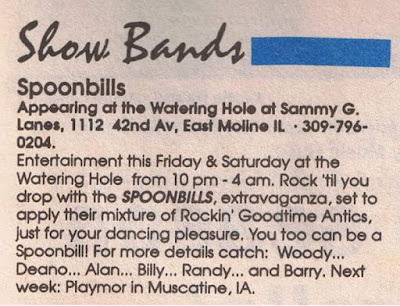 The members of the band were each talented young musicians, with only one or two having professional training. Randy, a bass player seen below in the River City Blues tee shirt, was one of these. Ezra was the other band member with training. Alan Garcia became the regular bass player after Randy left.


Bill Vanetta took over drums as Woody became more of a front man, especially after Giulio moved away. Also just a few years ago, the reunion of The Spoonbills took place, which was covered here. 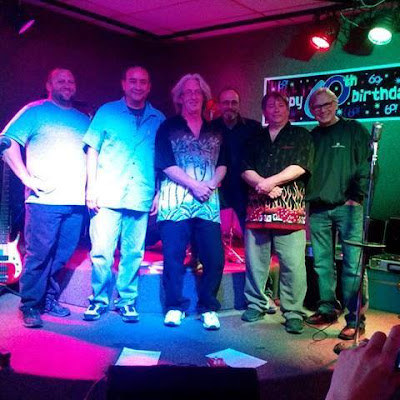 All this history has led to being recognized, and awarded. The Spoonbills lead the pack. 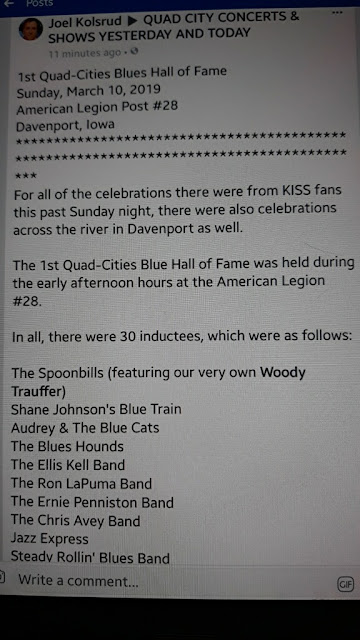 A recognition now suitable for framing, by a band who collectively 'rocked' the blues their way, with members who still perform live. Barry and Bill both also perform with The Creepin' Charlies. 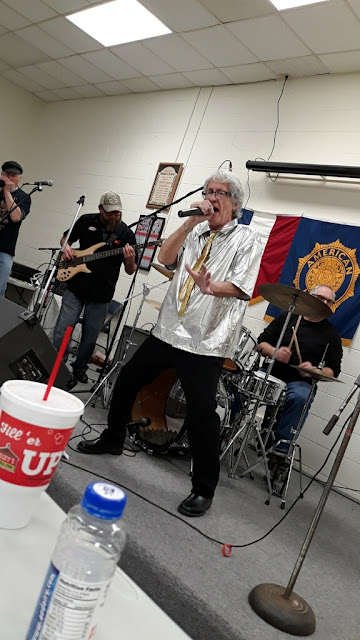 A side note: I met Barry working at Case Co. in Bettendorf, IA, probably around '73 or '74, long before The Spoonbills came into being. Most of the artifacts used here belong to Woody Trauffer, and the memories come from their sometimes 'road manager', moi. 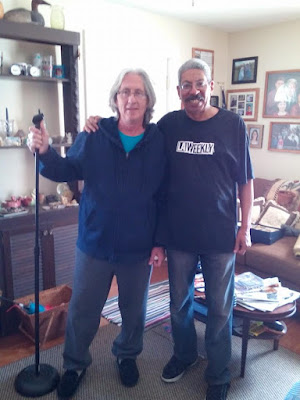 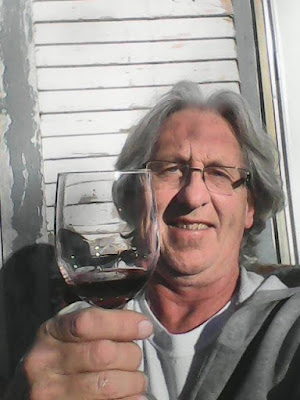