READ A LABEL, THANK A MOM

IT'S YOUR RIGHT -
BSC, CA – Back in the day the original mandate was, a) you have the right to know what is in your food, and b) you have the right as a consumer to healthy ingredients over corporate profits. The second part of this mandate was trickier, mainly due to the distance between the people who control those decisions and the people who consume, like cattle, hence the buying public. The middle cattle prod – Moms Across America. Read a label, thank a Mom. 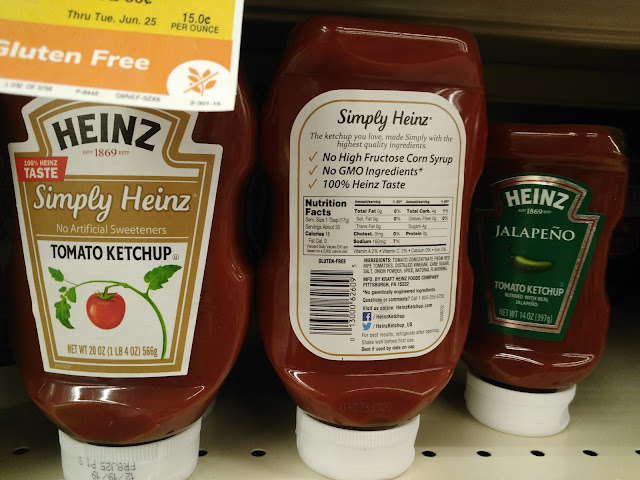 This original mandate was and is a freedom, the freedom for you to be able to do the aforementioned things, especially from the giants. Pictured above are two label pictures taken just a few weeks ago, at a Ralph's showing Heinz products. When the Moms started, those labels didn't exist because the public didn't know and didn't care such things. I was one of those people.
Today I still run into people who either don't know or don't care. There will always be that. You just can't convince everyone of the truth, but that was never the purpose or plan. The plan was to reach the people on the inside. We wanted to reach the people inside the walls that we couldn't reach, face to face, and say, 'Hey, feed us the good stuff because we deserve this as people of a free society. We deserve this because we are people just like you. We want to know what's in our food.' Above and following are examples that show the companies heard and are hearing our voices. Now it is up to the people to act on the listed ingredients and improve their waist lines with more than nutrition.
I can talk this talk because I have walked the walk. I went from a size 38 waist to a 32 in six months with no special diet or exercise program. I don't own a car so walking is a part of my lifestyle. What I learned from my association with Moms Across America and label GMOs [tip o' the hat to John Diaz] led me read food labels and understand how the ingredients affected my body weight. Not watching commercial TV or cable helps with a clearer vision of the world, as does drinking purified, filtered water.
It must be stated that I probably do the bare minimum of health maintenance for my body and mind, but the cannabis I imbibe is enhanced by the variety available at present in California. It ain't the same everywhere. Food and medicine are national products because everyone potentially needs them in mass appeal. The same isn't true for alcohol products which is why they vary from state to state.
Read a label in any state, thank a MOM, not a paid expert.

ALSO NEW STARBUCKS IN RIVERSIDE -
BSC, CA – After almost perfect weather through the start of summer here in Riverside, it seems that our good luck may have morphed into having two California seasons at once this year. In an ordinary year, you have your four seasons in California. There is mudslide season [late fall-midwinter], earthquake season [midwinter-mid spring], if the Lakers win, riot season [late spring], and fire season [summertime-early fall]. This year for Riverside, two seasons started almost back to back. With a wildfire happening just two days before the Fourth of July at Sycamore Canyon, the fire truck pictured above, heads out that way to help stop a brush fire that peaked at 201 acres, more pics after the jump. On the 4th before the fireworks came out, there was a 6.4 'foot massage' [earthquake] that friends back in Iowa asked me about. I hadn't felt that one but friends down in Murrieta and San Diego did. Then today just two days later and less than an hour ago, another earthquake hit. This time I felt it shake the place for about a minute, kind of up and down and back up, in intensity. This time friends in SD didn't feel the shake, indicating a completely different earthquake area.
If it were two fires and an earthquake, that wouldn't be so strange, but two earthquakes two days apart in fire season is not usual. Also two seasons running concurrently is unique, even for California. Makes you wonder what's up?
The brush fire in the Sycamore Canyon area started in mid-morning, producing these pics. 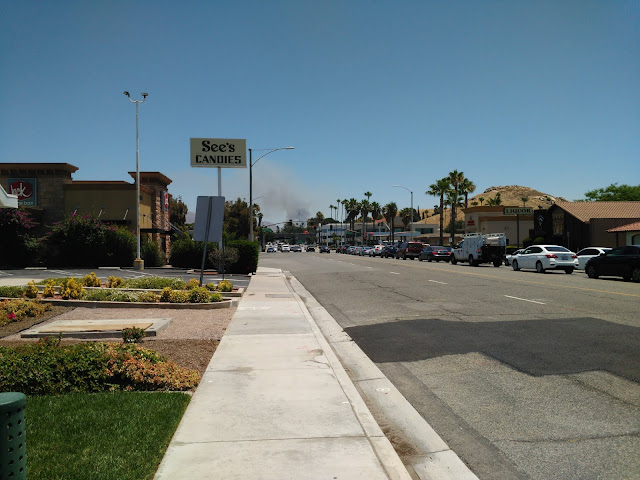 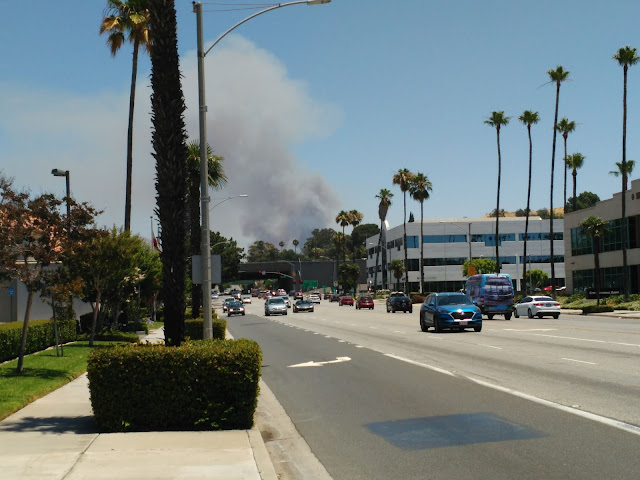 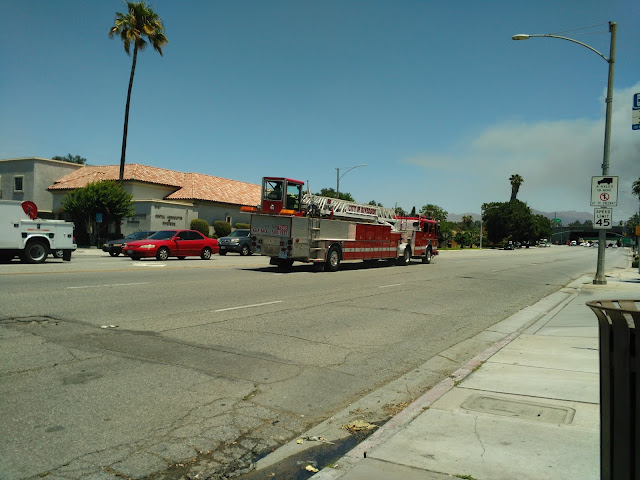 Later after the fire really developed, the smoke cloud widdened. 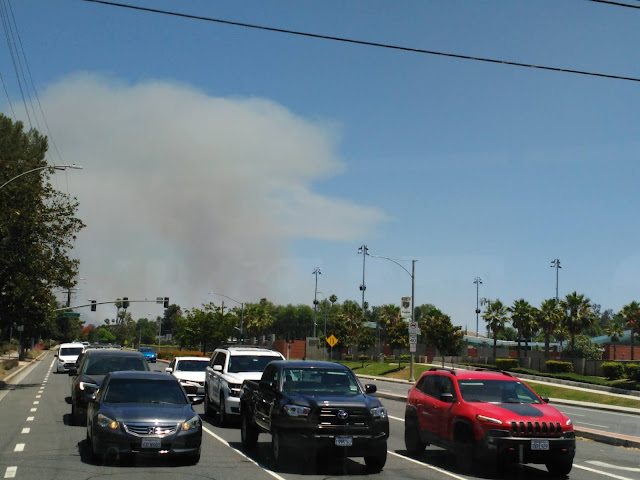 By the end of the day the fire was completely contained.
In other news of a less destructive nature, a new Starbucks opened at the corner of University and Iowa where the delicious Co Co's used to be. The older Starbucks located at the corner of Iowa & Blaine, is a bottleneck at various times of the day. This newest Starbucks, just about a quarter mile away, is hoped to siphon off the overflow and draw new college goers from the UCR edge which touches the area. 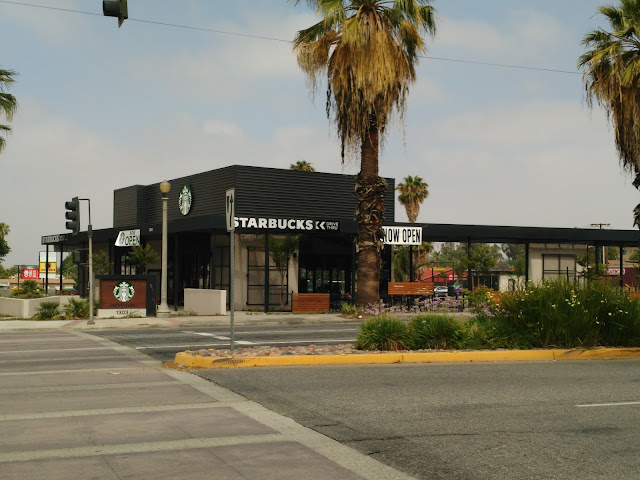 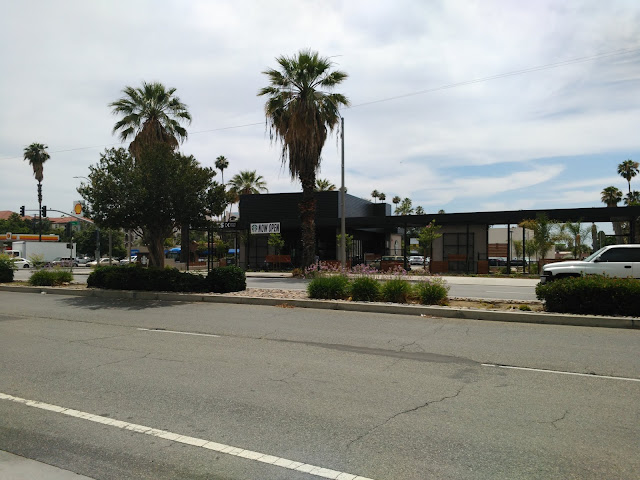 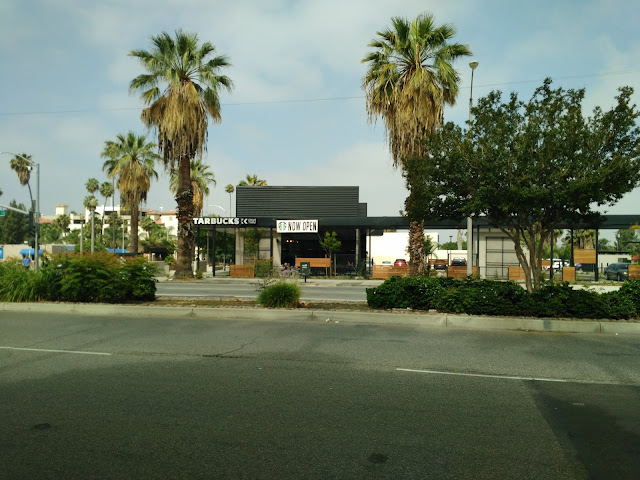 The summer season starts amid great weather still for this time of year.
Posted by Bill Gould at 5:44:00 PM